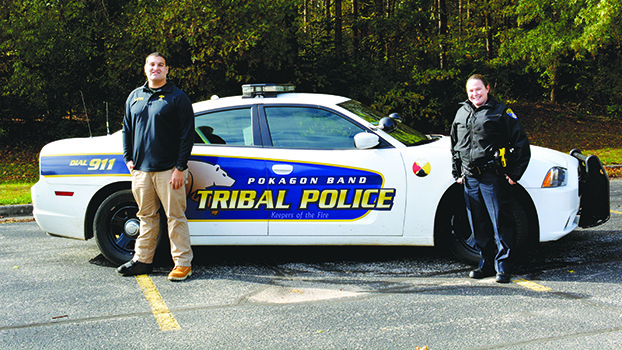 CASSOPOLIS — Just after 11 a.m. Wednesday, a number of Cass County first responders milled about the parking lot of the Cass County Medical Care Facility in Cassopolis, each wearing their respective uniforms identifying them as sheriff’s deputies, firefighters and police officers. As they made their way toward a white tent featuring food and music in the parking lot, the first responders were approached by facility staff and residents thanking them for their contributions to the county.

“With all of the negativity generated and received by the government currently in our world, we wanted folks to see the government is working for them and doing something positive for our local heroes,” said Christian Lutes, Cass County Medical Care Facility administrator in training. “This is the county’s way — and all of our patients’ way — of saying thank you to folks who take care of us and don’t get the recognition.”

As Cass County Medical Care Facility is a county government run nursing home, Lutes said he felt it was appropriate for the facility to host the first responder’s luncheon to thank other Cass County entities for keeping the county safe.

“This is our way of appreciating who we consider to be our local heroes,” he said. “[First responders] give a sacrifice for the county and our residents, which is what makes them heroes. … We wanted to recognize the unrecognized, and that is the folks who are the first on the scene when an emergency strikes.”

Local first responders who attended the event said they appreciated the effort to recognize them for their work.

Alan Miltenberger, a firefighter with the Pokagon Fire Department for the last 10 years, said he thought the event was a good thing for the county.

“This is really nice,” he said. “I do what I do because I love it, but this is still really nice to be thought of.”

Chief of the Cass Central Fire Department Jeff Locke said he was similarly grateful for the event, even though he said first responders do not do what they do for the recognition.

“I just feel that everyone should give back to the community and this was my way of giving back to the community,” he said. “But, it’s great to be noticed and to know that what we do is appreciated by people. It’s awful nice of [Cass County Medical Care Facility] to do this.”