Dowagiac hoping to play the role of the spoiler 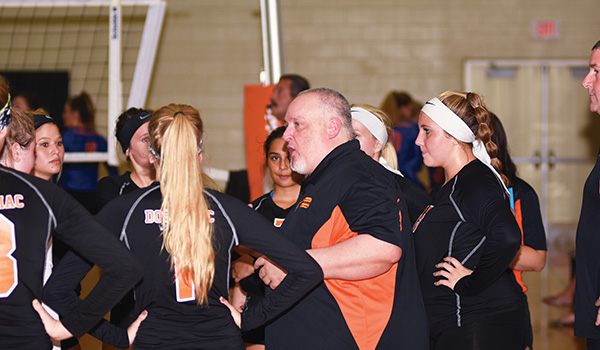 EDWARDSBURG — A pair of district champions could potentially meet in the finals of the Division 2 district volleyball tournament in Edwardsburg Nov. 3.

For the first time, the MHSAA has divided volleyball into districts, switching from the previous class system.

Last year, Niles and Edwardsburg both won titles in different districts. The two met in the regional finals with the Vikings picking up the victory and advancing to the state quarterfinals before being eliminated.

Edwardsburg has turned in another outstanding season as the Eddies enter the tournament with a 33-5 record and a Wolverine Conference championship under its belt.

The Vikings meanwhile, are 20-20-2 heading into Tuesday night’s quad at Gull Lake and Saturday’s SMAC Tournament at Kalamazoo Central.

If the two are to meet, it will not be until the championship match.

There are several teams looking to derail that meeting, including Wolverine Conference runner-up Vicksburg, who will face the winner of the Edwardsburg-Paw Paw match, which will be played at 7 p.m. on Nov. 1, and Three Rivers, which opens up against Niles at Edwardsburg High School at 5:30 p.m. on Oct. 30.

The winner of the Three Rivers-Niles match will take on Dowagiac in the first semifinal at 5:30 p.m. Nov. 1. The second semifinal is slated for approximately 7 p.m.

“The district draw is exciting,” said Edwardburg coach Sarah Strefling. “I think our district has some great teams in it and I always love good competition. We now have Niles in our district which keeps things interesting.”

Strefling is also pleased to have the home court advantage in the opening round of the state tournament.

“I love that we are home for this, and hopefully we draw a great crowd and student section to support these wonderful players, and our five seniors that have led this team to this point,” he said. “The five seniors this year understand the importance of defending the district title because they all played a big part of it last year as well.”

While the Eddies may be looking toward a rematch with the Bulldogs, Strefling knows that her team cannot overlook Paw Paw.

“We continue to take it one day at a time and focus on the team we have in front of us, which is Paw Paw first,” she said. “I hope we can continue to show up and keep complacency out of the picture. I love teams that continue to get better and hate to lose. Hopefully we have a great run and continue to use all forces to achieve it.”

Veteran Niles coach Jenny Nate is hoping her team can build some momentum heading into the postseason.

“We are excited to head to Gull Lake Tuesday,” she said. “They are honorable mention in Class A and have a very strong program. They are always an extremely tough team, who run a fast offense that is great preparation for us as we head into district play.”

Once the Vikings wrap up the regular season, their attention will turn to Three Rivers, which finished in the Wolverine Conference.

“We will put our total focus into one match and one point at a time,” Nate said. “We have to dominate each point and not get ahead of ourselves. We have an incredibly tough district filled will solid teams and strong programs who are playing very well right now.

“Right now, our only focus in on Three Rivers. We have to win that match before we think about anyone else. We faced them on day one of our season, and we lost to them, but the scores were 25-20, 25-27 and 16-14. We were actually up by several points a few times during the match and let them back in which comes back to mental focus and confidence.”

Dowagiac could play the role of spoiler in the district tournament.

The Chieftains have shown steady improvement throughout the year under first-year coach Tony Hooley and were 22-13-2 heading into the Bridgman Quad on Tuesday.

Hooley said that getting a first-round bye can be blessing and a curse, depending on the team.

“I personally like to play,” he said. “Practices can be a little stale and at this point. You are as good as you are going to get.”

Dowagiac finished sixth in the Wolverine Conference and lost to Three Rivers, Vicksburg and Edwardsburg.

“We play the winner of the Niles-Three Rivers match,” Hooley said. “Three Rivers would be a more enticing match for me since I am from Three Rivers and we lost to them early in the season. We have improved since then, but so have they. My team would probably rather play Niles since they are familiar with several of their players through club volleyball and other things.”

Hooley said his team has to have confidence if it wants to succeed in the postseason.

“Believing in yourself as a player and as a team, and that you have a chance to determine the outcome [is key],” he said. “That every now and then, one team puts together a nice run that surprises everyone. From an Xs and Os perspective, it’s all about execution and efficiency. The team that makes the fewest mistakes will continue playing.”

Admission is $5 and no league passes will be accepted per the MHSAA.