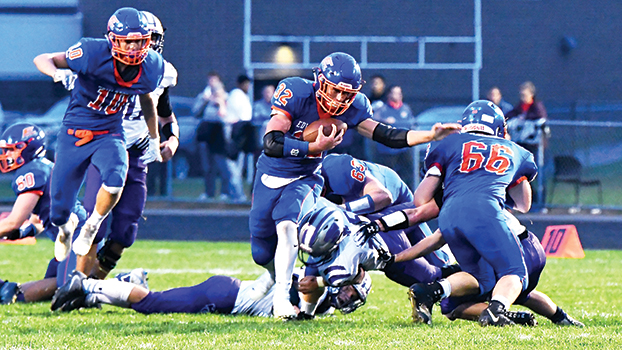 Chase Sager (32) and the Edwardsburg Eddies will host Plainwell in the opening round of the Division 4 playoffs Friday night. (Leader photo/KELLY SWEENEY)

EDWARDSBURG — Defending Division 4 state runner-up Edwardsburg will have a big red target painted on its back after the Eddies were picked as the favorite during the MHSAA Selection Show on Fox Sports Detroit Sunday night.

And that is just fine with the Eddies.

“I guess that does not make us nervous,” said Edwardsburg coach Kevin Bartz. “I guess that means that we have finally made a name for ourselves and we finally have some respect across the state. It is better to have a target than not to have one I guess.”

Edwardsburg (9-0) is hoping for a return trip to Ford Field Thanksgiving weekend.

The Eddies will begin the postseason at home hosting Wolverine Conference foe Plainwell (6-3) at Leo Hoffman Field, a team Edwardsburg defeated 48-6 on Sept. 28.

The winner will advance to the district championship game the following weekend against either Three Rivers (8-1) or Paw Paw (7-2).

Both are members of the Wolverine Conference and both have tasted defeat at the hands of the Eddies.

Edwardsburg defeated Paw Paw 41-0 on Sept. 7 and defeated the Three Rivers 38-15 on Oct. 5 in a battle for first-place in the conference.

Bartz knows the challenges that his team faces in the postseason and said the Eddies are ready.

“Our district kind of fell like we thought it would,” he said. “Actually, the entire left side of the bracket felt similar to what we thought it would. We just need to keep doing what we have been doing and get them game-back game.”

The Eddies, who are undefeated for the second time in three years, have dominated their opponents in 2018.

The Eddies do most of their damage on the ground, but have shown the ability to throw the ball when they want to.

Quarterback Tre Harvey, who has rushed for 383 yards and scored five touchdowns, is 13-of-17 through the air for 431 yards and six touchdowns. Harvey has not thrown an interception in 2018.

While a lot is made of the Edwardsburg offense, its defense has been equally as impressive.

Drew Bidwell and Dylan McColley lead that defense with a combined 103 tackles.

McColley has a pair of interceptions and fumble recoveries. Cayden Calhoun also had two interceptions, including one for a touchdown.