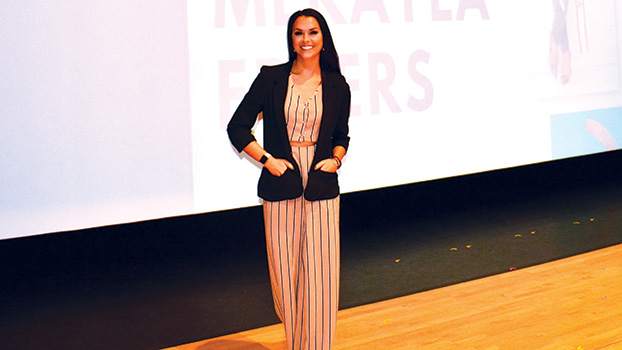 DOWAGIAC — Around 1 p.m. Monday, Mrs. America 2018 Mekayla Eppers stood in front of a group of hundreds of middle school students and told them that when she was their age, she thought her life would not amount to much.

“When I was in the sixth grade, someone told me that I was never going to achieve anything,” Eppers said. “They told me that statistically, I was never going to graduate high school, that I would never achieve anything and that I was destined to a life of drug and alcohol abuse. I was told that the things I have done that I am proud of would never happen because of what had happened to me in life.”

Despite what she was told, she graduated from White Pigeon High School in 2007. Her high school career included 11 varsity letters, four years in the marching band, four years as a class officer, and she graduated in the top 15 of her class.

Eppers went on to attend Albion College, where she was part of the volleyball team, track team and dance team. After graduating from Albion, she went on to capture the 2014 Miss Indiana USA crown, where she was a semi-finalist at Miss USA. Now, as Mrs. America 2018, Eppers raises scholarship funds for children in foster care.

“I was told I couldn’t do it, but I did it anyways,” she said. “I want every child to be able to overcome their obstacles and to become better than they are.”

Eppers visited Dowagiac Middle School Monday to talk to students about adapting to change and overcoming obstacles in life. The presentation was sponsored by Southwestern Michigan College’s Education Talent Search. By working with the program, DMS is able to bring in speakers throughout the year to talk to students, with this year’s theme being adaptability.

“What we are trying to do is help students understand that there are students who have to go through difficult circumstances and that they had to adapt to their situation or their job or a relationship so that they can be successful,” said DMS Principal Sean Wightman. “We try to bring in speakers that can share stories about that and provide students with a voice they can relate to.”

Eppers’ story fits into theme, as she has had to adapt and overcome many times in her life, from experiencing sexual abuse as a child, growing up in the foster care system and later in life watching her husband become a cancer survivor.

“I think adapting is a great topic for kids this age, because they are going through many changes — hormonal, social and academic,” she said. “I want to show these kids how my life has changed and how I was able to deal with that. … I’ve been through a lot, and I want them to know that they can take charge of their own lives and write their own futures.”

Having traveled the country and beyond to Canada and South Africa to share her story, Eppers said she was excited to be back in Michiana Monday to talk to the students at DMS.

“Every place I have spoken, if there is one person it has helped, then it is worth it,” she said. “I want to inspire these kids to grow and be even better than they already are.”

Wightman said he thought Eppers’ program was beneficial to the students who heard it.

“Students will have to adapt many times in their life,” he said. “We want students to see someone who has done that and changed their future, so the students can start to think about their long-term goals. … I think students really benefit from this program.”