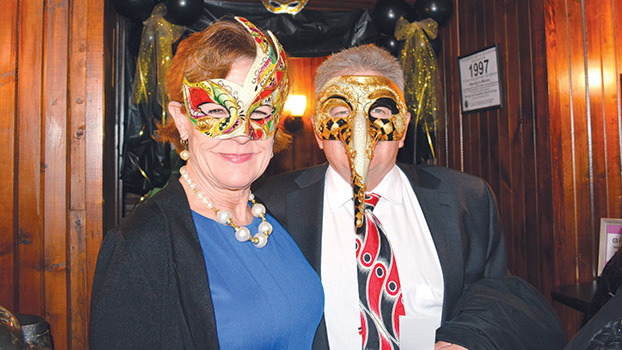 DOWAGIAC — Philo’s Pub at Round Oak Revisited was transformed into a speakeasy Saturday night, as lights from the dance floor reflected off of the beads on flapper dresses and metallic eye masks.

Though visitors that evening were partying like it was 1929, the speakeasy was created to raise money for a serious cause in Cass County.

Domestic and Sexual Abuse Services hosted its annual masquerade Ball Saturday in Dowagiac. The event reached its goal in ticket sales, with organizers calling the event a success. All money raised from the event and its silent auction will go toward DASAS’ general operating costs. The organization serves St. Joseph, Van Buren and Cass counties with the objective of leading efforts to end domestic violence and sexual assault in southwest Michigan. DASAS offers a number of services to domestic and sexual abuse survivors including a 24-hour crisis hotline, counseling, support groups, legal advocacy and access to housing and financial assistance, in addition to many other services.

“The money raised will go toward continuing services and support to survivors of domestic and sexual violence,” said Director of Advocacy Deborah Hackworth.

Though this is not the first time DASAS has hosted its masquerade ball, it is the first time the event was hosted in Dowagiac, as the event has previously been hosted in St. Joseph County. The move to Dowagiac was a way to reach out to the Cass County community to raise awareness both of domestic and sexual violence, but also of DASAS’ services in the area, according to DASAS officials.

Hackworth said the move to Dowagiac was a successful one that brought out a positive response from the community.

“We are so excited by all the community support,” she said. “Everyone has been so great.”

One supportive Dowagiac community member was Cindy Brosnan, owner of Round Oak Revisited and Philo’s Pub, where the fundraiser was hosted. Brosnan said she was happy to support DASAS due to all they do in the community.

“The reason why this is such an important organization is because it reaches so much of our county, and other counties, as well,” she said. “It is a greatly needed organization for the community, and it is mostly volunteer based. When they volunteer so much of their time for our community, the least we can do is support them.”

Hackworth said she was thankful for the community support that made Saturday’s fundraiser successful and able to bring more awareness to DASAS’ services.

“This is so important, because it shows the community cares and gives survivors [of domestic or sexual abuse] a voice,” she said. “With support like this, we can show survivors that they are not alone and do not need to wear a mask of shame.”