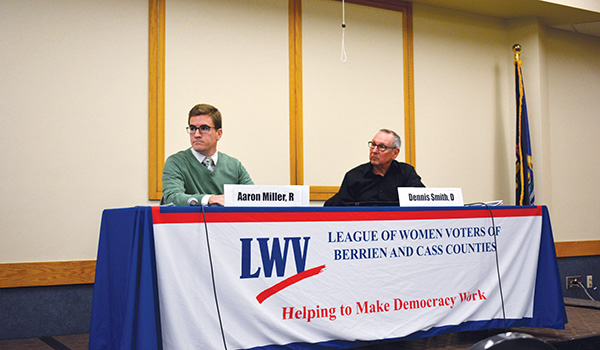 DOWAGIAC — Thursday, two candidates running for a seat in the Michigan House of Representatives sat down before their potential constituents to let the public get to know them better.

The League of Women Voters of Berrien and Cass Counties hosted a candidate forum Thursday at Southwestern Michigan College’s Dowagiac campus. The event featured the race between incumbent Aaron Miller (R) and challenger Dennis Smith (D) to represent Michigan House District 59, which includes the entirety of St. Joseph County and parts of Cass County including the city of Dowagiac, and the townships of Calvin, Jefferson, La Grange, Marcellus, Mason, Newberg, Penn, Pokagon, Porter, Volinia and Wayne. The candidates will be on the ballot for the Nov. 6 election.

During the forum, the candidates were asked questions prepared by the League of Women Voters, a nonpartisan organization, about key issues in the race, as well as questions written by members of the audience. The candidates had two minutes to answer each question.

“I’m running again because I always think there is good to be done,” he said.  “There is always more do, just like in teaching, which is my career. In government, I don’t think the work is ever done. Society and issues are always changing. I think we can be better as a state, and I want to be a part of that.”

Challenger Smith followed with his opening statement, saying he decided to run for office after retiring as a teacher and parish pastor.

“What I have seen is a number of social issues that I’m sure can be part of people’s own poor decisions, but are certainly exacerbated by decisions made in places like Lansing,” he said. “At this time in my life, I felt called into a position of public service.”

Many topics were discussed at the forum such as guns in schools, women’s health, Michigan’s no-fault car insurance and the opioid crisis. The candidates also answered questions about topics that have for years been identified as key issues to Michigan voters: jobs, the Michigan road system and access to healthcare.

Smith, who answered the question first, said that even though the unemployment rate has decreased, he believes the legislature has taken steps backwards due to the repealing of the prevailing wage law.

“The problem is that many people who are employed are not being employed productively, because the poverty rates are remaining stubbornly in the same double-digit levels,” Smith said. “There are more people working, but they are working harder and they aren’t getting any farther ahead.”

On the topic of roads, the candidates both said they support improvements to the roads.

Miller said that was in the house when in 2015 when bills were passed that increased the gas tax in Michigan. Though he said that the increased tax angered many, he said that money is needed to improve the road system.

“The quality of roads we want drives the cost. I still believe that three years ago I did the right thing, even though I didn’t like the whole thing,” he said. “I still think we need more, because good roads drive everything in our state.”

Smith said that he agrees that taxes are need to fund the roads, though he thinks the gas tax hurts those that can least afford it.

“We need to invest,” Smith said. “If we want good roads, we are going to have to pay for them. The way we pay for things is through taxes. … Where are we going to get the resources, I’m not sure. I wish I knew, but investing in our infrastructure is the right way to go, and if that means finding revenue through taxation, I think that is an investment that will eventually pay off.”

When asked what the government’s responsibility to ensure citizens have adequate access to health care, the candidates had differing answers.

Miller said that adequate access to healthcare is already in place, but it is not the most efficient or cost-effective system.

“The fact is that I think single-payer is inevitable. I don’t want it, but I think given the current atmosphere, it’s inevitable, because what we are doing right now is a charade of kind of doing government healthcare, but we don’t really want to,” he said. “I think we are assuring adequate healthcare — we have terrific hospitals in this area — but are we doing it in the most efficient way? That is the difference, and I think the answer is no.”

When it was his turn to answer the question, Smith said that not only does he think single-payer healthcare is inevitable, he believes it is better for the people of Michigan.

The forum ended with the candidates, closing statements.

“Thank you for this opportunity,” Smith said. “This is good, and I would welcome the chance to do it more. I am seeking the endorsement of this district to represent them. … I believe that there are important needs in this district this district that aren’t being met, and I want the opportunity to address those.”

In his closing statement, Miller also thanked the League of Women voters for hosting the forum.

“I appreciate everyone being here,” he said. “I would like to say what I said four years ago, what I said two years ago, ‘test me and see if I am your right candidate to represent you in the 59th district.’”

Representatives with the League of Women Voters and event facilitators said they hope people in the audience found the forum helpful in light of the upcoming election.

“Good government does not just happen,” moderator Hartzel said. “Citizens have the responsibility to choose their elected officials wisely.”