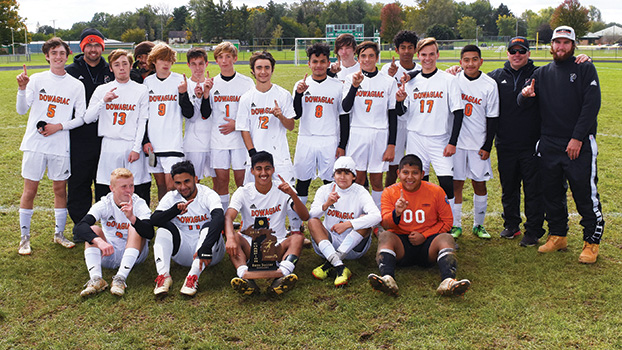 BERRIEN SPRINGS — Junior Cristian Wilson scored a pair of goals to help lift Dowagiac to its second consecutive Division 3 district soccer championship with a 3-1 victory over Schoolcraft at Berrien Springs on Saturday.

The Chieftains, who defeated Berrien Springs 4-0 last season to win the school’s fourth district championship and its first since 2010.

Junior Ben McCrorey tied the match at 1-1 in the 23rd minute, while Wilson scored what turned out to be the winning goal in the 33rd minute.

Extremely windy conditions hampered play to a point, but Dowagiac used it to its advantage the best it could to protect its lead.

When Wilson scored again in the second half, the Chieftains tightened up the defense and got a solid performance by goalkeeper Victor Zavala in the final 40 minutes.

Dowagiac had plenty of growing pains during the regular season as head coach Mike Williams and his staff worked to find the right combination.

“This team right here, I honestly was expecting to do well even though we lost five seniors,” he said. “Based on their work ethic since last year. They have been through two sessions of indoor, they have been in the weight room all winter long and they played spring soccer. Before the season even started, we already had our lineup. This team as a unit plays better together than last year.”

Williams said there was no panic in himself, his staff or his players when Schoolcraft scored the first goal.

“I just told them to stay composed,” he said. “I wasn’t nervous, and I do not think they were either. They realized it was just a mistake.”

Williams said that over the last month and a half, the key to Dowagiac’s success has been patience.

“We kept trying to run it down their throat against a flat four [defense],” he said. “We were just trying to run through walls. We just needed to be patient, swing it out and then bring it back in.”

Dowagiac senior Edgar Bravo was not about to play his final match in Berrien Springs on Saturday.

The defensive standout gave his teammate a message prior to start of the match.

Bravo also said that because of the changes and challenges throughout the season, Saturday’s title was a little bit more special.

“This feels great,” Bravo said about winning back-to-back titles. “I am very proud of my team. It was a great team effort. We have had our struggles during the season, but we found our chemistry when we needed it.”

Dowagiac will travel to Otsego to face No. 2-ranked Hudsonville Unity Christian in the 7:30 regional semifinal match.

The winners will play for the regional title on Saturday at Otsego.