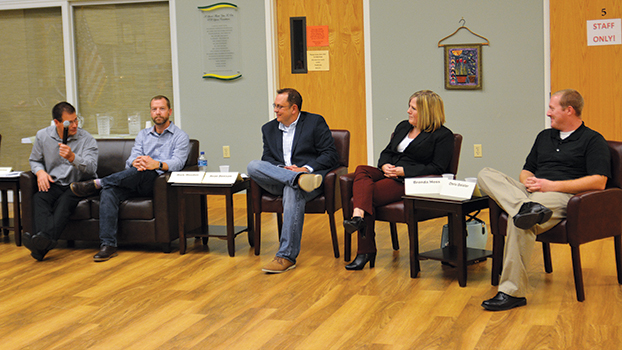 From left, Cameron Downey, Mark Weedon, Mayor Brenda Hess, Sean Denison and Chris Downey, debated during a forum Thursday at the Buchanan Senior Center. All are running for the three open seats as commissioner, except Hess who will be stepping down. (Leader photo/KELSEY HAMMON)

BUCHANAN — From recreational marijuana to improving local business, residents of Buchanan asked city commissioner candidates to speak their mind on some of the issues that are at the heart of the Midterm Election.

The event took place at the Buchanan Senior Center, drawing a crowd of about 100 people to participate. Residents who visited the forum were invited to jot down questions to ask candidates. Moderator Alice Kring read the questions and gave each candidate a set amount of time to respond.

Candidates vying for the three open commissioner seats include Sean Denison, Cameron Downey, Chris Geisler, Spencer Miller Jr., Mark W. Weedon and incumbent Dan Vigansky. The ballot will also list Mayor Brenda Hess, who intends to step down from her role as mayor, pending the sale of her home. She will only be listed on the ballot because it was too late to remove her name. Unlike the other candidates, Hess told people not to vote for her. She encouraged participants not to “waste” their vote and instead select from the other runners.

“I hope that you will pick three that best reflect your values and community values and keeps Buchanan on the path of small town with a big heart,” Hess said.

Vigansky was the only candidate not able to attend Thursday’s forum. He released a statement which Kring read to those in attendance, stating that his wife was scheduled to have a minor surgery in Indianapolis, and he wanted to be with her at the time.

“I am very passionate about doing my best to improve life in Buchanan,” Vigansky said. “I am a doer.”

There were a number of questions that candidates seemed to share similar opinions on, including what they see as the top three issues facing the city of Buchanan. Candidates cited the need to improve infrastructure, such as the sewers, storm water drains and the wastewater treatment plant, finding ways to more efficiently allocate city funds, and attracting more local business.

Denison often honed in on ways to better use city financial resources and said this was key to fixing any challenge Buchanan faces.

Candidates also largely asserted that they support medical marijuana and see it as potential revenue for the city. When it came to recreational marijuana, however, some of their opinions differed.

While the potential legalization of recreational marijuana is ultimately up to the vote of the people, candidates were asked whether they would permit the industry to operate in Buchanan.

For his part, Downey said he did not want to see recreational marijuana budding in downtown Buchanan.

“When it comes to recreational marijuana, [I’m] not too thrilled about the idea of it being downtown, near other businesses, near the library,” Downey said. “We want to attract people downtown. We also want to accommodate the children in the area.”

Weedon expressed a mostly positive outlook on recreational marijuana. He asked residents to do their own research and not let “fear-mongering” guide their vote. Through past trips to Las Vegas, Nevada and Colorado, he said he had the opportunity to see marijuana businesses.

“They were just beautiful. There [were] not bums hanging around the street,” Weedon said. “I can tell you they were not in front of the marijuana facilities.”

He assured residents that these businesses have stringent protocol in place for allowing people to enter and purchase the products, working in tandem with state law, too.

Denison said he would vote no and not permit recreational marijuana downtown.

Hess said she was not in favor of recreational marijuana. She said one factor in the marijuana debate is that southwest Michigan is a border area.

“I believe we are the first stop within southern Michigan, if people are going to come and eat at restaurants and make a day trip out of it and spend money on things other than recreational marijuana that would be great,” Hess said.

Geisler agreed, saying he was for medical and not for recreational.

“I guess that’s something we can all agree to disagree on,” he said. “That’s why we are here to have a civil conversation.”

Vigansky outlined his beliefs on the topic in his statement and said he supported medical but not recreational marijuana.

“I will vote against recreational marijuana, as it was written at this time,” he said. “This will create a lot of work for whomever the next commissioners are.”

Candidates were also asked what their vision for the downtown district was and how they could help business owners work with them to achieve that goal.

Downey said improving building facades would be a start.

“I’m more than willing to grab a paintbrush and help somebody out if they need it,” Downey said.

Weedon said they needed to embody the state’s “Pure Michigan” campaign by using 21st Century technology to advertise Buchanan. He said capitalizing on internet services to spread the word about local businesses could be a start.

For his part, Denison said he felt residents share a common vision of a bustling and vibrant downtown. As someone with business management experience, he said he wanted to see shops open longer to match this vision.

“We need businesses that are open,” Denison said. “We need stores that allow customers to come in every day of the week.”

Geisler said they should look to other cities, such as St. Joseph and South Bend’s Eddy Street Commons to serve as examples.

“They have different shops, different restaurants,” Geisler said. “Something I would love to see is new commissioners come together and bring some of these places together.”

He added that researching tax incentives for local businesses could also potentially aid the downtown.

Hess reminded candidates that business owners all have different goals, needs and visions for success. She asked any new commissioner to get involved in talking with business owners.

After about an hour and a half of questions that delved into other topics like how they would tackle the vacant Electro-Voice building, what some of their top commitments in life are and how they could reduce taxes, the forum came to a close. After the questions and answer segment, residents were invited to talk with candidates.