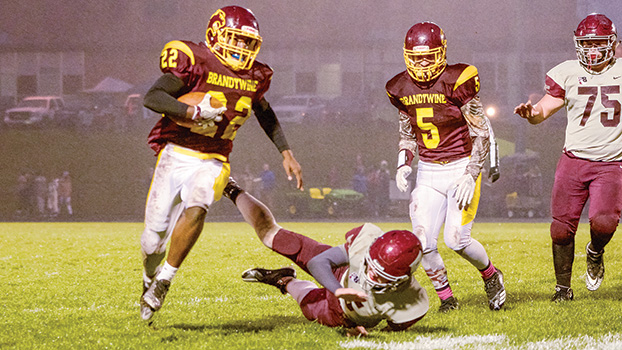 Robert Gordon gets around the end against Buchanan in the Bobcats’ 62-12 win over the Bucks Friday night. (Leader photo/TIMOTHY RITTER)

NILES — Having already qualified for the state playoffs last week, the Brandywine Bobcats looked to do some damage to rival Buchanan Bucks on Senior Night.

And they did just that, thrashing the Bucks 62-12 at Selge Field Friday.

Just like it has been all season, the potent Bobcats offense got things going just a minute and half into the game with Jordan Abrams’ 61-yard touchdown on the third play from scrimmage.

Buchanan quickly answered with consecutive first downs on the ensuing drive, but had to settle for a punt after Connor Janowiak sacked Gannon Kutemeier on third down and 16.

The third play on the Bobcats’ second drive also found the end zone, this time when Robert Gordon rumbled 34 yards to paydirt.

The one-two punch of Abrams and Gordon has been a terror for Brandywine opponents all season.  Abrams has 1,423 yards rushing with 23 touchdown and Gordon has 1,448 yard with 24 touchdowns.

The consistency on offense also showed on defense. But you wouldn’t have guessed through Brandywine’s first three games of the season.

Brandywine’s defense stepped up against the Bucks, starting with Gabe Gouin’s intercepted of a Kutemeier pass and a return of 25 yards for a touchdown. The Bobcats would finish with three picks in the contest.

Buchanan’s offensive line couldn’t contain Connor Janowiak either, as he recorded three sacks on the night.

The scoring barrage continued as Brandywine quarterback Bryce McLane found Shane Brown down the left sideline on a 36-yard pass following the punt. With that score, Brandywine eclipsed the 400 point mark on the season.

Buchanan found some life on its fourth possession of the first quarter. Aiden Kile was able to penetrate the Bobcats defensive line and muscle his way for a 30-yard touchdown run.

The explosive opening quarter had Brandywine leading 28-6 and well on its way to a sixth consecutive victory and a 7-2 regular season mark.

Abrams scored the next three Bobcats touchdowns, all in the second quarter. He scored on runs of 16 and 22, as well as a 69-yard punt return that gave Brandywine a 50-6 lead at halftime.

Abrams finished with 16 rushes for 201 rushing yards, with the mercy rule in effect at the start the second half.

Brandywine forced a three-and-out, which gave Gordon the opportunity to score his second touchdown of the game a 13-yard run. Gordon finished with 12 rushes for 94 rushing yards and a pair of scores.

Buchanan would get on the board one last time in 2018 on a 65-yard touchdown run by Isaiah Rimpson in the third quarter.

Gouin capped the scoring his second touchdown of the game, a 40 yard run.

Buchanan would finish with a 1-8 record in back to back seasons.

Brandywine’s playoff fate rests in the hands of the MHSAA selection committee. The Bobcats are in a unique situation because they can play in either Division 6 or 7 when the pairings are announced Sunday night.