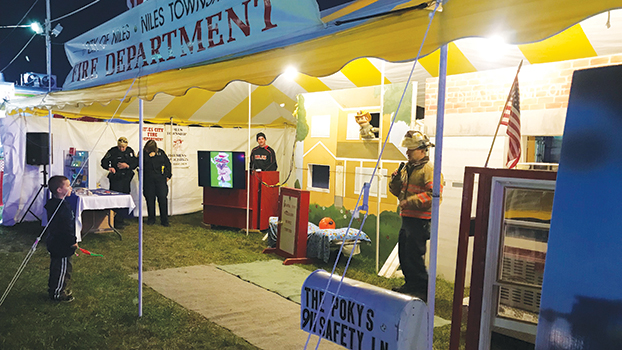 Niles city and township firefighters teach children about public safety during a past community event. Local firefighters are encouraging people to check their detectors and have a plan in place in the event of an emergency. (Submitted photo)

SOUTHWEST MICHIGAN — In honor of National Fire Prevention Month this October, local firefighters across Berrien and Cass counties are reminding residents of the importance of doing a home safety evaluation, to assure the function of smoke alarms, carbon monoxide detectors and review a safety plan.

Niles Fire Chief Larry Lamb said while it is always a good time to make sure that residents are prepared for a fire or carbon monoxide leak, colder weather can possess additional hazards.

“It’s important to have them in place year-round,” Lamb said via email Thursday. “However, we tend to spend more time inside with fuel-burning appliances during winter months.”

One of the most important things residents can do to assure their safety is having proper detection devices in place, Lamb said.

“It is a must to have both working smoke detectors and if the home has gas appliances, a fire place or an attached garage it is especially important to have at least one carbon monoxide detector located where it would wake you up while you’re sleeping,” Lamb stated.

In lieu of proper placement, Lamb advised residents to make sure their detectors work.

“Smoke detectors only last 10 years while carbon monoxide detectors vary from three to seven years depending on the one you choose,” Lamb said.  “So, if you can’t remember when you installed them, or they appear discolored, it is probably time to change them.”

With all proper detection in place, Lamb said families should also create a safety plan in the event of an emergency. Lamb said they should pick a designated meeting place outside. That way in the event of a fire, the family will know that everyone safely escaped the home.

Personnel from the Niles City and Niles Township fire departments work with Niles and Brandywine school districts to talk about fire safety regularly. Lamb said among the things they emphasize is that children should make sure that they have a window in their bedroom that can be opened and serve as an escape in the event of an emergency. He also said it is safer for people to sleep with their bedroom door closed, because it can keep smoke from permeating the bedroom.

Outside of Niles, there are many other fire departments partaking in fire safety awareness for the month of October. Just a few miles down the road in Dowagiac, Deputy Fire Chief of the Dowagiac Fire Department Robert Smith has been offering community fire safety training this month during community festivals and events. Like Lamb, Smith said that a working smoke detector is the first line of defense against a fire, adding that he has personally been to scenes where lives were saved because a family was alerted to a fire via smoke alarm.

“Anything that can safely alert someone to get out of a dangerous situation like a fire is obviously a benefit,” he said.

Not only did Smith advise that every home should have working smoke detectors, he recommended during an earlier interview that residents change the batteries in their smoke detectors twice a year.

“Making sure that a smoke detector is routinely checked and working can — and does — save lives,” he said.

For residents who may not be able to afford a smoke detector or carbon monoxide alarm, there are options to get the technology for free.

Lamb said many local fire stations, including Niles, Dowagiac, Edwardsburg and Cassopolis have detectors on hand to give to residents. Fire authorities can even visit the resident’s home to install them.

In Berrien and Cass counties, ServePro has contributed detectors to fire stations to ensure that local residents have access to detectors.

“There is not [an] excuse not to protect your family,” Lamb said.