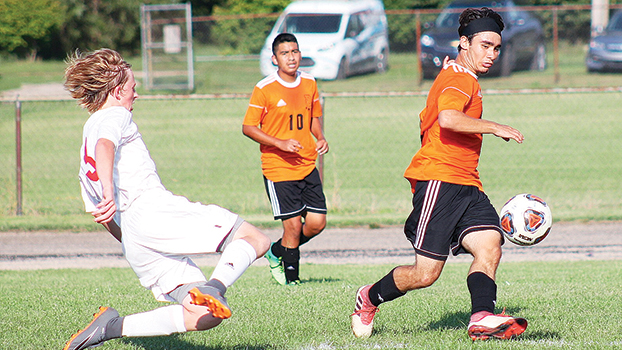 Cristian Wilson had a pair of goals in Dowagiac’s 4-0 win over Berrien Springs in the Division 3 district semifinals Wednesday. (Leader photo/SCOTT NOVAK)

The Chieftains got a pair of goals from Cristian Wilson, along with a goal and an assist by Cole Parker to defeat the host Shamrocks 4-0 Wednesday afternoon.

Dowagiac advances to the 11 a.m. championship game at Berrien Springs to face Schoolcraft, a 4-0 winner of Constantine in the other semifinal Wednesday.

“The difference between today and Monday was patience,” said Dowagiac coach Mike Williams. “We didn’t force the attacks and did a nice job feeding through gaps.”

The district champion will advance to the Division 3 regional at Otsego High School Oct. 24.

Wyoming Lee and Hudsonville Unity Christian are playing for the district title at Grand Rapids South Christian. The winner takes on the Berrien Spring district winner at 7:30 p.m.

The Rangers led 1-0 on a goal by Brett Williams in the opening minute, but trailed 2-1 at halftime following goals by Joshua Parks and Jergens.

Jergens scored the lone goal of the second half.

“This was a heartbreaking loss for our team,” said Cassopolis coach Austin Francis. “We scored really early on with a great strike from Brett and continued to have good shots throughout the game. Credit to Howardsville as they never stop attacking or putting pressure on the ball. Both teams played very tough.”

Jason Sopaseuth had four saves for the Rangers, while Zachary Grandlinard had 13 saves for Howardsville, who will face Lake Michigan Catholic at 1 p.m. at Marcellus High School on Saturday.