Sweep may be costly for Bobcats 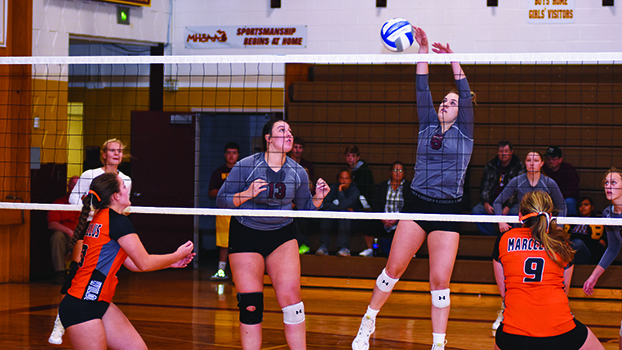 NILES — Host Brandywine won its own quad against Dowagiac, Cassopolis and Marcellus Tuesday night, but it may have come at a huge cost.

Late in the second set of the final match of the night against the Chieftains, senior setter Audrey Longley dove for a ball and came up injured.

Longley tried to play through the pain, but had to come off the floor after a couple of points to seek medical attention.

The extent of the apparent back injury is unknown. The Bobcats are set to play in the BCS Athletic Conference Tournament on Saturday.

“It has something to do with her back,” said Brandywine co-coach Makenna Bowen. “Audrey is pretty good at bouncing back, so hopefully we can get her all healed up by Saturday.”

The Bobcats, who swept the Chieftains, Rangers and Wildcats to improve to 38-4, were also without head coach Janet Markunas, who has been serving a suspension, according to Brandywine Athletic Director Vance Stratton.

Tuesday was the final night of the suspension.

The Bobcats had little trouble defeating Cassopolis and Marcellus, but struggled against Dowagiac in the third and final match of the night.

“Maybe we got a little comfortable,” Bowen said. “We have got to learn to go hard at all times no matter who we are playing.”

Dowagiac and Cassopolis are no strangers to each other, having played multiple times this season at tournament.

The Chieftains defeated the Rangers at their own tournament to kick off the year and against at Eau Claire.

Dowagiac had not played well in its previous two outs, so Hooley was happy to see his team turn things around.

“Better effort that last Thursday and Saturday, so that was a bit of a relief,” Hooley said. “We controlled the ball a little better. Once we got into a rhythm our offense improved and the sun came out. After some early miscues, the team settled down and started executing more efficiently.”

Dowagiac was deadly from the service line with a nearly 95 percent success rate and 18 aces.

The Chieftains head off to the St. Joseph Invitational on Saturday after wrapping up Wolverine Conference play at Paw Paw tonight.