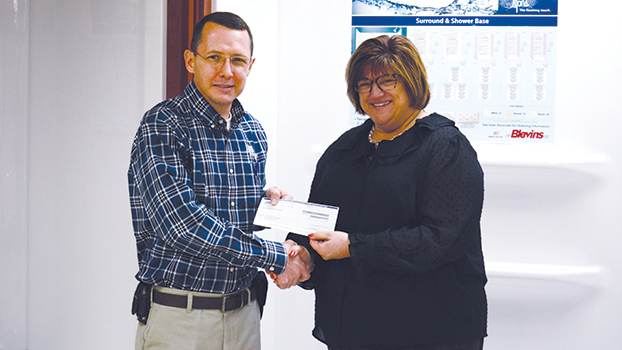 DOWAGIAC — United Way of Southwest Michigan has a vision of putting a book into the hands of every child under the age of five in Cass and Berrien counties. Now, with a donation from a Dowagiac business, that vision is closer to becoming a reality.

Wednesday, family-owned manufacturer Lyons Industries, 30000 M-62 W., Dowagiac, donated $4,000 as a gift to United Way of Southwest Michigan. The money donated will be used to support United Way’s Dolly Parton Imagination Library, which gives Dowagiac children, from birth to 5 years of age, access to free, age-appropriate books, mailed to their homes every month, to help increase children’s readiness for kindergarten.

President of Lyons Industries Lance Lyons said that he believes the DPIL is an important program, adding that he is happy as a business leader to support the community through the donation to United Way.

“Reading is so important to the development of children and their success is very much dependent on them being able to read well, and we [at Lyons Industries] take that very seriously and want to support that,” he said. “We take chances to support the community when we can, because without the community, we wouldn’t be here. We depend on them, and it is the right thing to do to give back.”

The DPIL was launched in 1995 in Tennessee, and has grown into a nationwide program. United Way of Southwest Michigan has been offering the program free of charge to children in Cass and Berrien counties for nearly a decade.

United Way of Southwest Michigan President Anna Murphy said the program is important because it promotes early literacy and can help parents read with their children.

“It really gets kids comfortable with books, holding them the right way, turning the pages and knowing the feel of a book,” Murphy said. “So, with the children so young, it’s not so much about teaching them how to read as it is, but getting them familiar with it, so they have the base in place. It’s a two or three prong program, which is why it is so successful.”

Murphy said she was excited about partnering with Lyons Industries, as she believes the donation will help bring awareness to the program in Cass County and encourage others to donate to the program.

The actual cost to provide the program to the community is about $25 per child, per year.  Currently there are 71 newborns in Dowagiac enrolled in DPIL, costing $8,875 for them to be in the program for the full five years they are eligible. United Way is currently looking for individuals or organizations to make a gift to help grow the reading program in Dowagiac to impact 100 total newborns. That would be a total of $12,500 needed to cover the full five years.

“This is a start to hopefully getting some additional dollars for Dowagiac, and I’m hoping this donation will be a jumping point for other businesses to participate as well,” Murphy said. “This $4,000 is huge and will be a great help to our local youth.”