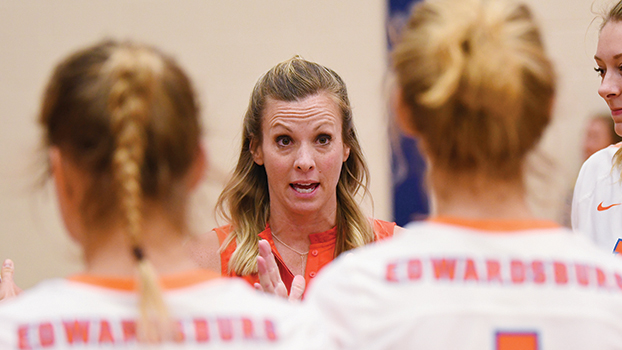 Edwardsburg coach Sarah Strefling talks with her team during a time out. (Leader photo/File)

EDWARDSBURG — Visiting Edwardsburg wrapped up a share of Wolverine Conference volleyball championship with a 3-1 win over Vicksburg last Thursday.

The Eddies need only defeat Sturgis tonight to claim the outright league title.

Veteran Edwardsburg coach Sarah Strefling and her team enjoyed the atmosphere and the challenge of taking on a good Vicksburg squad.

“Vicksburg was exciting and filled with a lot of energy,” she said. “I love their coach and she runs a great program, so I knew they would be tough even though I know a few of her main players graduated. It was also their senior night. I try to remind our girls that we all we can control is what we do on our side of the net and if we adjust and control the ball well, we will minimize errors and hopefully win.

I love being competitive and playing teams that are able to be competitive. Vicksburg has always been a team that Edwardsburg is somewhat ‘rival’ with.”

Skye Leach had a huge game for Edwardsburg with 17 kills, 15 digs and two blocks.

Setter Claire Alby had 46 assists, 23 digs and a pair of aces.

“We ended up dropping the first set and I thought, ‘oh boy, hope we can turn it around,’” Strefling said. “We weren’t passing well set one and that led to some issues attacking. Set two through four we starting passing a lot better and our offense also responded. Anna, Jocelyn and Skye came around and started offensively dominating, which is fun to see, and Claire played awesome defense against them.”