Edwardsburg Band looks to build off past success 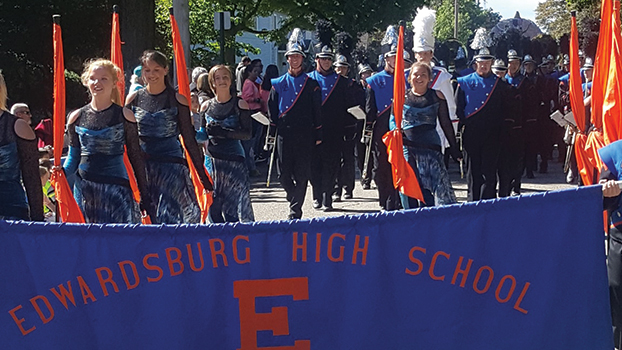 EDWARDSBURG — With roughly 95 students participating, the Edwardsburg High School marching band is one of the largest in the area.

“Our show this fall is called Atlantis, and it’s some pretty steady music,” said Alexis Banks. “The kids seem to really like it. We compete in MCBA, which is the Michigan Competing Band Association. We’re currently ranked fifth out of 11. Last year we finished at ninth, so we’re pretty excited that were up a bit higher than we were last year and making some progress, which is great.”

So far this season, the band has found early success. On Oct. 10 they competed at the District Six MSBOA Marching Festival at Niles High School. At the competition, there was a standstill due to rain, so bands had to perform inside the school’s gym without marching in order to prevent instrauments from getting ruined.

“The students really got a chance to show off everything that they’ve been working on musically and the precision that we work on and how tough the music is,” Banks said. “But unfortunately, they don’t get to show off all of the marching drills and their technique and their feet, which is a little bit of a bummer, but it does give us an opportunity to shine in a different way. The students to do like that.”

Next, the band went to Lakeshore on Saturday to compete. Banks said it was a good show for the students. But the season doesn’t stop there.

This upcoming weekend, the band will travel to Jenison, Michigan, for the MCBA. Then the following weekend they will go to Rockford for the West Shore Invitational.

“This is definitely the meatiest part of the season,” Banks said. “This is when kids spend the most time in the band room. The most amount of time of looking over the show and seeing if they can improve before the season wraps up.”

Depending on how they perform, they will move onto the state competition at Ford Field in Detriot, which is likely to happen.

“In years’ past, they’ve taken the top 12 out of our flight [to go to state] and this year they will take the top 10,” Banks said. “Luckily for us, we have a smaller flight this year of 11, so we just have to beat one other band out to go to state, so as long as we do that. We’re just looking at how high we can place at state.”

Over the past three years, Edwardsburg High School has finished 11th, 10th and ninth at state, and this year, Banks said finishing in eighth place or higher would be a worthwhile accomplishment for the band. However, Banks wants to be careful to not jinx the team.