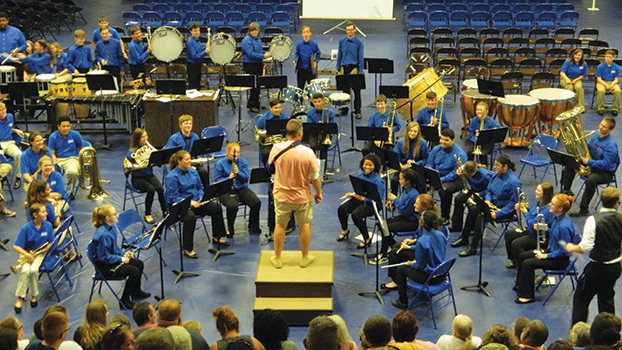 At the marching band event, the Cassopolis band received a division 2 rating.

“We were really pumped going into the festival in Niles, and we did well,” said Sean Keck, the director of the Cassopolis Band. “We ended up getting a division two. It literally stands for excellent. A one is superior, a two is excellent and a three is good.”

Due to weather, the marching festival was moved indoors, which Keck said prevented the band from showing off their marching skills — an aspect of performing the band excels at.

For instance, at an earlier event, the Otsego Marching Competition, the band won best marching. The band finished second place in their class out of six teams.

Next year, Keck said the band’s goal will be to do everything they can to make sure they receive a division one rating at the District Six Marching Band Festival in Niles, whether they are able to march or not.

“They did a great job this season,” he said. “They performed admirably, they worked very hard and they made the show their own. We took an abstract idea. Our theme this year is called ‘O Canada.’ We took an abstract, kind of out there idea and turned it into a really fun experience.”

Followers of the band are still able to see them play at Cassopolis football home games. The football team is already guaranteed to make the playoffs and, given its success, will likely have a few home games left.

“You’ll definitely see us at home in the stands,” Keck said. “We probably won’t do our halftime show because typically at this time of year we like to pivot into concert season. Our focus in the classroom shifts from marching to focusing on our concert competitive season.”

The next event the band will prepare for is their winter holiday concert, which will be sometime in mid-December. The theme has not been determined yet.

After that, the band will begin to focus on competitive concerts, as well as its spring show.

“Everything builds towards that,” Keck said. “Marching season really only takes up all of September and the first part of October. Then we make a hard pivot into indoor concert band.”

Keck would like to thank the Cassopolis Public Schools administration, parents, K&M and the McLoughlin Family Foundation for all their support this season. He said that without the support, the band would not be in the position it is today.

Edwardsburg Band looks to build off past success