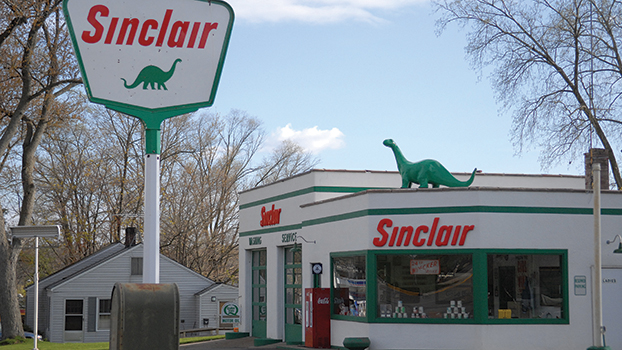 CASSOPOLIS — There’s a large, green dinosaur on top of the Sinclair Station off Broadway Street in downtown Cassopolis, a marketing tool Sinclair Oil first used in the 1930s. Today, this work of art is still synonymous with Sinclair, even if “Dino” isn’t sitting directly on top of a station.

What is new to the station in Cassopolis is that for the next two weeks, art will also be featured on the inside.

Starting this past Saturday, the Cass Area Artists began hosting an art show at the Sinclair Station that will take place again this Saturday, as well as on Oct. 27. The show runs from 10 a.m. to 2 p.m. This is no fee to view the show.

“It’s the same show, but it runs for three Saturdays,” said Tom Rose, president of the Cass Area Artists. “It actually may change a little bit because we had one artist sick that will be there for the second show, so we may have an additional artist.”

A variety of artists with different skills set are selling their work. Artists from Cass County will show works including watercolors, oil and pencil pictures, fabric art, woodturning, digital art and more. Rose said the artists at the show come from every corner of Cass County, including Niles, Edwardsburg, Cassopolis and Dowagiac.

“It’s an interesting show,” Rose said. “It supports local artists and it gives them a chance to get artwork for their home at great prices, such as people looking for something to improve their decorating and change things around. Also, with Christmas coming up, we had one gentleman, who is from the Detriot area, who saw an object that his wife liked in the woodturning, so he is going to give that to her for Christmas.”

Going forward, he said that at least one new artist will be at the next show, after missing the first one due to an illness.

He said that the turn out was good during the first weekend and that each of the artists were able to sell some of their work.

“We were surprised by the number of visitors that come to Cassopolis,” Rose said. “The rentals on Stone Lake, the people love to take a walk during the day and they were walking downtown and visiting the shops.”

The Sinclair Station, which is going to be used for other events, such as a town showcase for the Cassopolis Public Schools student-run coffee shop, a joint effort with the village. The showcase will take place on Oct. 25.

“The Sinclair Station is a fantastic backdrop for the paintings and the artwork,” Rose said. “It’s filled with life and it has an ambiance because of its history. You just get a great feeling and it’s surprising that an art gallery works so well there.”

To get ready for the show, he said that some of the artists have been preparing for more than a year. Artists and crafters in Michiana who are interested in showing in future Cass Area Artist Shows can contact Rose by email at boater458@yahoo.com.

Order and Chaos Emporium Tattoos and Piercing to host…