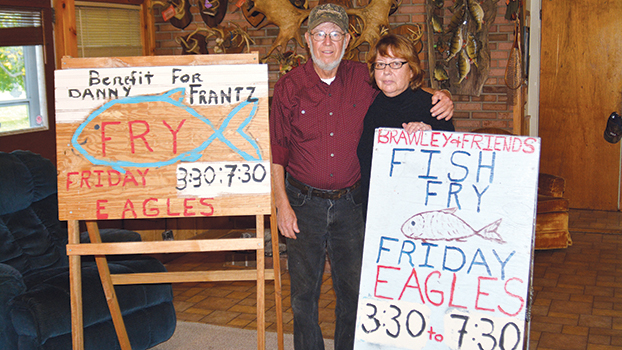 From left, Danny and Le Ett Frantz pose for a shot in front of a sign advertising an upcoming fish fry. The fish fry will help to raise money for Danny’s cancer treatments. (Leader photo/KELSEY HAMMON)

NILES — When Danny Frantz was too exhausted to go fishing this summer, his wife Le Ett Frantz knew something serious was wrong.

Her intuition was sadly right. Danny, 72, of Dowagiac, formerly of Niles, was diagnosed with stomach cancer Friday, July 13. Faced with a host of medical costs, due to losing his health insurance benefits from Honeywell, Danny’s friends, John and Ginger Brawley and family will host a fish fry to raise money for his treatment.

The Brawley Fish Fry will take place from 3:30 to 7:30 p.m. Nov. 2, at the Niles Eagles, 34 Sycamore St. Those who participate are asked to contribute a $10 donation at the door. Dinner will include coleslaw, baked beans, dessert and rolls.

Those who have lived in the Berrien and Cass counties area long enough have likely seen Danny, precariously traversing a thin layer of ice on numerous local lakes to fish. The Niles native and 1965 Brandywine High School graduate has a reputation for ice fishing early in the season, pretty much as soon as half an inch of ice forms on the water, though the ice should be 4 inches thick for safety.

“My passion is through the ice,” Danny said. “That is what I like to do the most, ice fish.”

However risky one might view Danny’s conquests, his efforts to fish have been serving the community for years. Once he has reeled in his catches, he donates the fish to fundraising fish fries across Berrien and Cass counties. His fish have helped to benefit fish fries for the Cassopolis Robo Rangers, a local high school robotics team; a Cassopolis family devastated by a house fire and the Central Cass Fire Department when they hosted a fundraiser to help a local girl raise the funds to have prosthetic ears after she was attacked by a pit bull. Additionally, the Babe Ruth Little League, Helping Hands, Niles Community Schools District and many, many others have benefitted from Danny’s fishing.

Danny first started using his passion to fish for a cause when his mother, Georgianna Hoover, was battling brain cancer back in 2006. Hoover received a $500 donation from The Brian Parker Memorial Foundation. After she passed away later that year, Danny decided to help the organization that had helped his mom. In 2007, he sought to pay them back for their efforts by raising money through a fish fry.

From there, Danny continued to fish with local causes in mind and in his years of donating fish, he estimates that he has helped to raise thousands of dollars for numerous causes.

“Danny loves to fish,” Le Ett said. “[But] you can’t fish every day and not have the fish pile up. For him to be able to have somewhere for the fish to go, benefitting somebody, he just feels great about it.”

For Danny, fishing has always been part of life. His father, Wayne Frantz, first taught him how to collect bait and cast his reel into the water. Before his cancer diagnosis, Danny had a number of local haunts where he liked to spend between four to five days a week fishing, including Stone Lake and Paradise Lake.

But recently chemotherapy treatments have taken a toll on his mobility and therefore his ability to fish for as long as he used to. Following his treatments, Danny described what feels like an electrical shock pulsing through his fingers and face.

Danny is now retired from a 32-year career with Honeywell, a software solutions company in South Bend. Danny was among thousands of retired employees from Honeywell entitled to lifetime health insurance coverage. However, the company slashed those benefits and Danny lost his health insurance at the end of July, just a few weeks shy of his cancer diagnosis. The company has made headlines across local media sources since enacting the controversial decision, which according to the South Bend Tribune left 4,700 retirees without health insurance. Danny is now on Medicare, but a number of treatment costs will still have to be paid out of pocket. A particularly expensive aspect of his treatment is a surgery he needs to remove the cancerous tumor.

Danny said he is not used to being on the receiving end of a fundraiser. Since his diagnosis, several local businesses have made contributions to his family and many in the community have stepped up to offer support.

With some help from his friends, Danny will seek to catch fish to support his own fish fry benefit. He said seeing his friends and family rally around him has been uplifting despite his battle with the illness.

“When this community comes together it is unbelievable how much effort is put in,” Danny said.