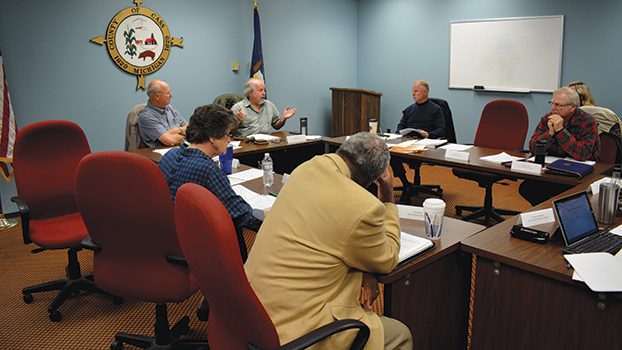 The Cass County Board of Commissioners will vote on whether to approve a resolution opposing recreational marijuana Thursday. (Leader photo/SARAH CULTON)

CASSOPOLIS — As the legalization of recreational marijuana is becoming a hot topic in Cass County ahead of the November election, some county commissioners are looking to put out the fire.

The resolution, drafted by Cass County Prosecutor Victor Fitz, cites data from states that have legalized marijuana, specifically Colorado, that recreational marijuana has led to increased school suspensions and expulsions for children and marijuana-related driving fatalities have increased under legalization. The resolution also cites studies from The National Institute on Drug Abuse that links marijuana with lowered IQs and mental illnesses, including psychosis, depression and anxiety.

Now, Commissioner Clark Cobb said he has spoken to a lawyer about the issue, but it is still not clear whether there is any law prohibiting the commissioners from taking a stance on the issue of recreational marijuana.

“It was [the lawyer’s] opinion that we just not go there and to maintain neutrality, which is what a government should do on a ballot issue,” Cobb said. “Recreational marijuana is not the only proposal on the ballot. What if someone comes to us with a proposal on the gerrymandering proposal? What do we do then? You are kind of opening a can of worms in a way.”

Outside of the legality of the issue, Cobb said he was against passing the resolution due to the fact that he believes the voters should be able to decide for themselves whether or not they want to pass the recreational marijuana proposal.

“It’s up to the people of Michigan. If they want to vote it in, they will, and if they don’t, they will vote it out,” he said.

Despite legal concerns, the Cass County Prosecutor’s Office urged the board to pass the resolution.

“With the ‘border county’ reality of Cass County, the legalization of recreational marijuana would create an even greater public safety concern for our Cass County residents,” Prosecutor Fitz wrote in a letter to the Cass County Board of Commissioners. “Your sheriff and prosecutor and boards of commissioners around Michigan have taken such a public and active stance on this issue. We urge you to do the same.”

“You guys are elected to be leaders, and this is a leadership moment to show the community,” Vohwinkle said. “This will affect our community, and the voters of our county look to our leadership [for information]. … The reason we are bringing this to you, and I understand your concerns about maybe being sued, is because you are the leaders of this community. That’s what people are looking for, and that’s why we think it’s important for you to stand up for them.”

Taking into consideration statements on both sides of the issue, commissioners agreed to continue discussions at Thursday’s board meeting and to vote on the issue at that time.

“This should be brought forward and should be voted on,” said Commissioner Michael Grice. “This is our opportunity to speak up. If it passes on the ballot, it passes, but at this point in time, we have got to lead.”

The board will vote at its regular meeting at 7 p.m. Thursday at the county building in Cassopolis.