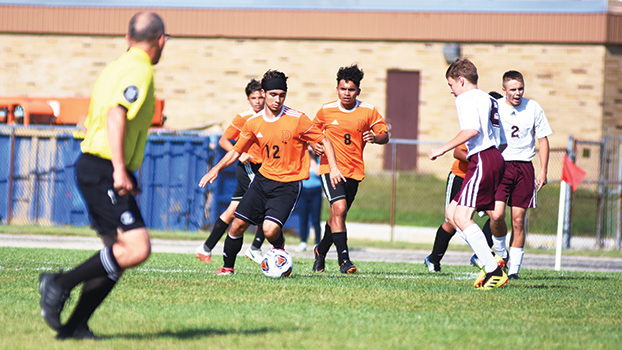 DOWAGIAC — The Michigan High School soccer postseason kicked off Monday night with first round district matches at Coloma and Cassopolis.

In Division 3, Dowagiac slipped by host Coloma 1-0, while in Division 4, Cassopolis needed a penalty kick shootout to defeat Michigan Lutheran.

Gustavo Cruz scored in the 28th minute off an assist from Cristian Wilson to give the Chieftains the victory over the Comets.

“As you can see by the shot total, we had several chances to score,” said Dowagiac coach Mike Williams. “Again, we need to be more patient around the goal. We are forcing shot attempts that are not good opportunities. We controlled the game. We just have to finish better.”

Dowagiac advances to face host Berrien Springs at 4:30 p.m. today in the semifinals.

The Shamrocks advanced to the semifinals with a 4-0 win over Benton Harbor Countryside.

The other semifinal will pit Schoolcraft against Constantine.

The Eagles defeated Brandywine 10-2, while the Falcons defeated Buchanan 2-1.

The championship match is scheduled for 11 a.m. Saturday at Berrien Springs High School.

Cassopolis trailed twice in its opening match of the Division 4 district tournament at Marcellus.

Michigan Lutheran led 1-0 on a goal by Roman Levi in the 32nd minute Monday night.

Niklas Dittman scored the tying goal in the 72nd minute to send the match to overtime.

Neither team scored in the first overtime, but Levi gave the Titans a 2-1 lead in the 94th minute.

Cassopolis responded in the 95th minute with a goal by Todd Bussey to send the match to a shootout.

“This was one of the most intense games I have coached,” said Dowagiac coach Austin Francis. “I think we came in overconfident and once Michigan Lutheran scored they did well by pulling most of their players back and becoming a very defensive unit. However, I am proud of our team’s perseverance. Niklas and Todd had clutch goals that kept us alive and Jason was brilliant during the penalty shootout. We have to get better at finding the net and finishing regardless of what the other team is doing.”

In the penalty kick shootout, Cassopolis connected on all four of its chances, while Ranger goalkeeper Jason Sopaseuth stopped two of the four shots he faced giving Cassopolis the victory.

Bussey, Lane Francis, Jeremy King and Enrique Matamoros all scored goals in the shootout for the Rangers, who advance to today’s semifinal in Marcellus against Howardsville-Christian.

The championship match at Marcellus is set for 1 p.m. Saturday.