Volunteers mobilize across Buchanan to tackle a dozen projects 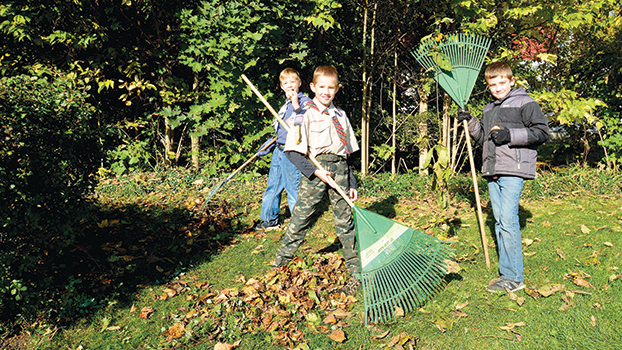 BUCHANAN — By 8 a.m. Saturday morning, volunteers across Buchanan were hard at work at a dozen different project sites, painting, cleaning, weeding and building, all for the sixth annual Make a Difference Day.

The event is a partnership between the city of Buchanan and First United Methodist Church, which comprise to form a Make a Difference Day Committee. By reaching out to local nonprofits,
committee leaders determined a number of projects to complete throughout their day of service. This year’s Make a Difference drew more than 70 volunteers to help them with that goal.

At Kathryn Park, Brittany Frantz, of Buchanan, worked alongside fellow volunteers to weed a community garden and prepare the planters for the impending winter season. Frantz is the marketing coordinator for the Make a Difference Day, in addition to her duties leading the project at Kathryn Park.

“[We just] want to get as much done in one day,” Frantz said. “We just like to help every project around the community that we can.”

Frantz also spearheaded the planting of the community garden at Kathryn Park and she said if not for the help from other volunteers, it would be a project she would have to tackle herself. In addition to beautifying the landscaping, volunteers at the park also power-washed the brick columns and entry way to the park.

Across Buchanan, Frantz said volunteers were tackling a number of different projects, including painting at the Buchanan Art Center, cleaning and sanitizing food pantry shelves at Redbud Area Ministries, cleaning the pavement near the Tin Shop Theatre, and many others.

This year, two new projects saw the completion of two new Buddy Benches. Through a grant obtained by volunteer Ashley Hanson, volunteers were able to build the wooden benches and place them at Moccasin and Ottawa elementary schools. The idea behind the benches is that if a child is having a tough day or they are being bullied, they can take refuge on the bench. Children who see someone on the Buddy Bench are encouraged to talk with them and invite them to play.

Another new project is the downtown installation of a Little Free Pantry. Similar to the concept of the Little Free Libraries around town, where children can pick up free books, those in need are welcome to pick up food staples and school supplies. The pantry will be located on the Buchanan Masonic Lodge’s property, at 122 N. Oak St.

Frantz said Make a Difference Day is important for a number of reasons. While she commended the Department of Public Works for their efforts, she said there are only so many projects they can get to. Mobilizing volunteers to complete projects that might otherwise fall through the cracks is one of the event’s main goals.

Helping to pull weeds in the early morning chill, Andrea Martin, a first-time volunteer for Make a Difference Day, said she heard about the event through her church, Faith United Methodist.

“We just decided as a group that we wanted to come out, dig in the dirt and make a difference,” Martin said.

Back at the Buchanan City Center, Barbara Pitcher, of Buchanan, a committee leader, said for Make a Difference Day helps many nonprofits tackle big projects that would put a lot of strain on regular volunteers. For example, she said Redbud Area Ministries is tasked with cleaning and sanitizing their food pantry shelves at least once a year.

On Saturday, Make a Difference Day volunteers helped the nonprofit tackle this project and complete it in a single morning.

Reflecting on how volunteers’ efforts would actually make a difference, Frantz said the changes will be noticeable.

“You can drive by and see the difference you are making. It’s not just like a personal ‘oh, it feels good to help out,’” Frantz said. “People can see what’s really happening. I love that. Buchanan is such a great town. Everyone just comes together and does what they can, when they can.”