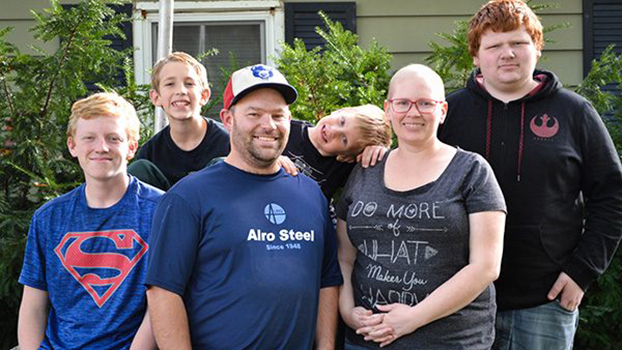 Veronica Pockrandt is pictured with her family last year, after the Niles Daily Star intiated a series on locals battling cancer. Pockrandt was recently re-diagnosed with stage four cancer and the community is hosting a dinner to raise funds for her treatment. (Leader file photo)

NILES — A Niles woman and longtime volunteer who helped to give a voice to those battling cancer through her blog has been diagnosed with cancer again. To help her give the fight all she has, the Niles community is rallying to raise money for her treatment.

Niles’ Veronica Pockrandt found out just short of her 35th birthday last year that she had breast cancer. Since then, Pockrandt has undergone surgery, chemotherapy and radiation treatments. This summer, barely a month after completing her treatments, she found out that the cancer had returned. She now faces a battle with stage four breast cancer that has also metastasized to her lungs and brain.

Pockrandt’s longtime friends, Amanda Dunnem and Katie Furner, in partnership with Pockrandt’s mother, Deana Burwell, will not let her fight alone. They are hoping to raise money for Pockrandt’s treatment and other expenses. To do so, they will host a benefit spaghetti dinner from 4 to 7 p.m. Saturday, Oct. 27, at Fairland Christian Church, 1811 Riverbluff Road, in Niles.

Tickets cost $6 per person and include a pasta dinner, salad, dessert and drink. Those who attend can also participate in a silent auction and a photo booth. Donations for the auction are still being sought.

Dunnem, Furner and Burwell said they hope to sell at least 200 tickets.

“We are trying to make sure she has enough to help with the boys, with Christmas and help with out of pocket medical expenses,” Furner said.

Dunnem, Furner and Pockrandt grew up together. The three first met at Ring Lardner Middle School. As they grew up, they said they saw time and again how Pockrandt was there for them and her tireless passion to give back to the Niles community.

“She’s someone who would never ask for anything, even if she really needs it,” Dunnem said. “She’s done so much for everyone else.”

Pockrandt is a mother of four boys ages 7 to 18: Alex, Bradley, Caiden and Dakoda. She has been a volunteer for the Berrien County Youth Fair, youth baseball and the Parent Teacher Organization.

Even while battling cancer throughout this last year, Pockrandt showed how determined she was to not let illness interrupt her life. She continued to travel around the state to watch her sons play at baseball games, packing a special preparation bag to help her cope with any side effects chemotherapy treatments might throw her way.

She continued to demonstrate her strength while volunteering at this year’s Four Flags Area Apple Festival, where she has been a regular volunteer. This year, she wore a patch over her eye, after she lost part of her vision. Regardless,  she helped to make cotton candy for Youth Day, picked up candy that is tossed to children during the festival’s parade and was a volunteer fixture throughout the four-day festival.

Pockrandt has also provided comfort to many women and men also battling cancer. When she first received her diagnosis last year, she searched the internet for answers but found mostly medical jargon.

Wanting to bring a human voice to the battle, she began blogging about the experience through the aptly named Tata Chronicles. Here, she described what it was like living with cancer day by day, detailing everything from chemotherapy side effects to losing her hair and finding joy in life, even when she was hurting.

While Pockrandt is taking a short break from writing the blog, Dunnem and Furner expect her to be back at it soon.

Dunnem encouraged people to support Pockrandt and her family by attending the dinner. She said that same evening there is a downtown Trick or Treat taking place and she suggested people cap off their evening by grabbing some dinner at the fundraiser.

Tickets for the dinner can be purchased in advance by contacting Dunnem at (269) 635-4666.  A limited number of tickets will be available at the door.