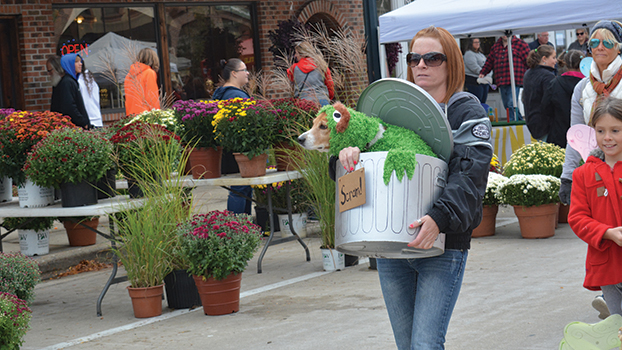 For the parade, dozens of dogs and their owners — including one goat dressed up as a dog — paraded down Front Street in Halloween costumes. Winners of best dog costume, best owner/dog costume and honorable mention went home with gift bag prizes from Bow Wow Bakery and Bath.

“It’s great to see everyone come out and enjoy this, even the people who don’t have pets,” Rohdy said. “Everyone smiles and everyone is happy. That’s why we like to do this.”

The winners of the dog parade said they — and their furry friends — enjoyed participating.

Winner of best dog costume was Jill Leak, 39, of Niles, with dog Rylie. Rylie was dressed as Sesame Street character Oscar the Grouch. Leak, who said she enters Rylie into costume contests often, said she stayed up until 2 a.m. Saturday making the costume. Despite the work, Leak said it was worth it.

“It’s always fun to do these things, and I’m happy people liked [Rylie’s] costume,” she said.

Best owner/dog costume winners were Susan and Rick Leach, of Dowagiac. The pair dressed their dogs Willow and Aramis as lions, with Rick dressed as circus leader P.T. Barnum. Susan said making the costumes and participating in the parade was a fun way to spend a weekend and take part in a town activity.

“We just like to be involved,” she said. “And dogs just touch your heart. How can you look at a dog and not smile? So, we thought this was a great opportunity.”

Honorable Mention winner was 19-year-old Dowagiac resident Danielle Lamb with her dogs Parker and Molly. Lamb dressed her dogs as Cinderella and the fairy godmother. She said she was happy to have won honorable mention and that she was glad she got to involve her dogs in a community event.

Rohdy said the costume winners this year were among the best she has seen in the years she has been hosting the parade and that that she is glad that those attending the Under the Harvest Moon festival enjoyed it.

“Everyone seemed to love it and have a lot of fun,” she said. “People just love dogs.”