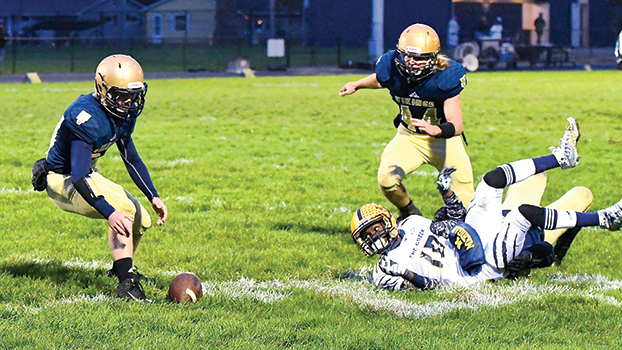 NILES — With two games left in the 2018 season, the Niles Vikings were hoping that winning those final contests, and ending with a 5-4 record, would be enough to qualify for the MHSAA playoffs.

Those hopes were thwarted as the Battle Creek Central Bearcats made the 82-mile trip to Niles High School and defeated the Vikings 24-21 on Senior Night.

Niles clicked right from the beginning, scoring on their first drive of the game on a Javond Ball 19-yard run, and then forcing a fumble recovered by Nolan Miller soon after.

Ball scored again, this time on an 11-yard-rush to give the Vikings an early 14-0 lead.

Niles, riding momentum after successful touchdowns on their first two drives, was able to convert a third down conversion on a Brayden Lake 27-yard pass to Jamison Zimmerman to get out of trouble inside of their own 10-yard line. The Vikings picked up another first down on the drive, but eventually punted.

Battle Creek Central then turned the tables as Mohamed Ahamed found a seam through the middle of the field and burned the Vikings’ secondary on way to a 40-yard touchdown reception.

The Bearcats would score again, but on a Markel Main 14-yard run after Niles turned the ball over on downs.

A quick four and out by the Bearcats to open the second half gave the Niles’ offense a chance to open the lead up.

Two plays later Ball scampered 71 yards to give the Vikings a 20-12 lead. Drew Gourlay tacked on the extra point to make it 21-12 and a two-possession game.

Gourlay converted all three of his extra point attempts on the night.

Niles stopped the Bearcats on fourth down again to get the ball back. But an offensive miscue forced Ball to lose 11 yards and then Lake fumbled the ball on the next play.

Battle Creek Central scored three plays later to close the gap to 21-18 at the end of the third quarter.

The Vikings and Bearcats traded punts on the next three possessions.

Midway through the final quarter, Battle Creek Central started on its own 18-yard line.

Niles committed a personal foul and a facemask penalty that gave the Bearcats a pair of first downs on their way to Morris passing for his third touchdown of the game with 17 seconds left. This time to Keondre Glass for 16 yards.

A great return to the Bearcats’ 45-yard-line gave optimism, but Lake couldn’t find an open receiver on four straight throws.

Bearcats’ Morris went 14 for 24 with 240 passing yards and three touchdowns.

Niles travels to Portage Central High School in the final game of the season.