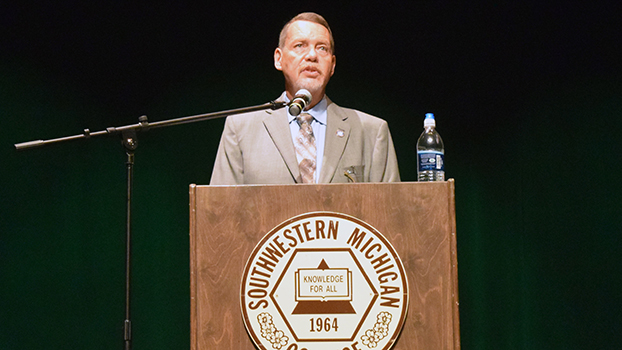 DOWAGIAC — As commander of a disaster medical assistance team, Southwestern Michigan College 1981 nursing alumnus Rick Hess is accustomed to serving as the tip of the federal response spear.

Hess, of Middlebury, Indiana, Sept. 30 returned from Hurricane Florence in the Carolinas, then to the Dowagiac campus Oct. 9 for SMC’s Academic Speaker Series. He is president of Hess, Karfomenos and Associates. His wife, Liz, also a nurse, accompanied him to Dowagiac.

“As first in, everyone watched to see if it was safe to send in the next batch of brown canaries,” he said. “Little did I know how those who couldn’t leave would impact us all. We provide care for others, but experiences we encounter impact us as human beings. Going into the den of the lion can be overwhelming, but I was surrounded by heroes who come in all shapes, sizes and every conceivable racial and ethnic background and every imaginable religious or spiritual orientation. As human suffering and need rose to the surface, those heroes from all walks of life rose to the occasion, whether at the Dome in New Orleans or at makeshift field hospitals.”

Rolling up in FEMA trucks in Louisiana, Hess’ team ran smack into “the self-reliant pride of local citizens. The welcome mat had been rolled up before Katrina made landfall. The sheriff of one parish confronted me with, ‘Are you a Yankee or a damn Yankee?’ He leaned in, his nose almost on mine, and snarled, ‘Damn Yankees don’t go home.’”

But there was also the woman in her late 70s plucked from the roof of her house by a chopper with only the clothes on her back. Every time they met, “She always presented me something — a brownie, a cookie, a little piece of sausage, saltine crackers in a cellophane package: ‘Food is love, Mr. Rick. Thank you, sir,’”
Hess recalled.

“Sept. 11 changed my career,” Hess said. “I was too old for military service, so I sought an alternative and was assigned to DMAT in Toledo, Ohio. I was now working in a federal M*A*S*H unit” he has commanded since 2011.

“For my dad’s generation, Dec. 7, 1941, the day the Japanese attacked Pearl Harbor and ultimately led the United States to enter World War II, was a defining, life-altering moment,” Hess said. “My personal defining moment occurred Sept. 11, 2001, when America was attacked. We watched in horror as commercial airliners [flew into New York’s World Trade Center, toppling its twin towers and damaging the Pentagon.]

“Flight 93 intentionally went down in a field near Shanksville, Pennsylvania. Passengers’ final recorded words continue to be a mantra for first responders and military personnel: ‘Let’s roll.’ Their efforts spared yet another potentially deadly crash in Washington with the Capitol rotunda opined as the ultimate target. On that day, 2,997 Americans lost their lives; 2,753 died at the World Trade Center — 412 were emergency responders from New York City and surrounding boroughs,” Hess said. “The word ‘terrorism’ became part of our everyday vernacular. I had my epiphany. My hot flame called for service. In the words of Martin Luther King, ‘What are you doing for others?’ It was time to walk the walk.”