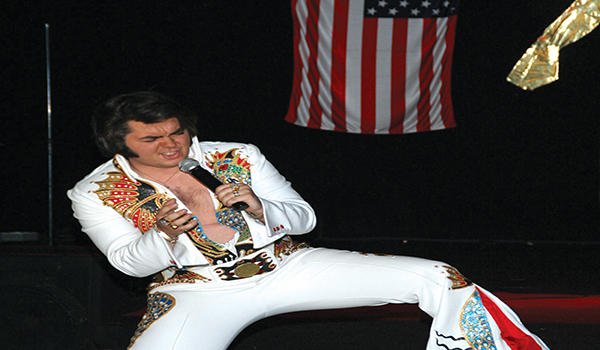 Tim Dudley, an Elvis impersonator, will be playing at the Barn Swallow Theater on Oct. 20. (Submitted photo)

EDWARDSBURG — On Saturday, Oct. 20, a musical act more than 40 years old is coming to Edwardsburg.

The act will not be done by the original performer, but instead by a man who has devoted more than a decade of his life to looking, acting and sound like “the King of Rock ‘n’ Roll.”

Tim Dudley, a long-time Elvis fan and impersonator, will be playing a tribute show at the Barn Swallow Theatre, 22334 US-12, Edwardsburg.

“I do an Elvis tribute,” Dudley said. “I’ve performed all over the United States and Canada. I have three opening acts. They’re going to perform for about 10 minutes each. Sid Ottman, who does a Frank Sinatra; Jessica Albert-Smith, who does a lot of plays and musicals in this area and a lady by the name of Karen McKenna will do some comedy. I thought it would be some family fun.”

Dudley will wear flashy replica suits, just like Elvis wore. He said that the suits can cost anywhere between $1,000 and $4,000, and he has six of them. However, on Oct. 20 he will wear a replica of the same suit Elvis wore at a show in South Bend 47 years ago.

To honor that night, Dudley will perform two acts, with the first being a song-for-song reenactment of the last show Elvis did in Michiana.

“I found the show on CD, and I said I’ll just recreate the concert since it’s the same night,” he said. “Then my second show will be pretty much all of his hits and different things. That’s pretty much one show.”

Dudley has been a fan of Elvis since he was 3 years old.

“I was born after he died — about six and a half years,” he said. “My mother and I lived with my grandparents and they were Elvis fans. They played his music and everything. That’s how I got hooked. They never thought I would take it this far, but they think it’s really cool.”

He said that he kept his love for Elvis a secret until after high school when he performed one of his songs during karaoke, and got help from friends “in the business,” such as Doug Church, the voice of Elvis.

Today he has done shows all over the United States, from California to Washington D.C. to Niagara Falls.

He became familiar with the Barn Swallow Theatre this past Christmas when his wife performed in a play there. Some of the proceeds from his show there will go to the theater for upkeep such as the roof and paint.

Dudley said he is excited for the show and to continue paying a tribute to Elvis.

“The economy is starting to boom again, so more shows are starting to come in,” he said. “There for awhile it was kind of here and there, hit and miss. But now it’s almost a weekly basis.”