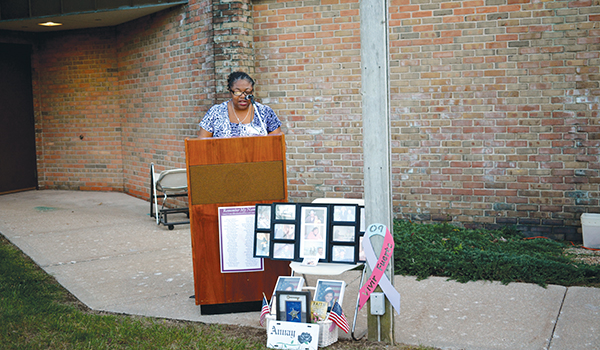 CASSOPOLIS — Looking down at a list of 64 names that she reads aloud every year, Advocacy Director for Domestic and Sexual Abuse Services Deborah Hackworth said every time she sees those names, it is as hard as the first time.

“It doesn’t get any easier to hear the names,” she said. “It’s sad, but it’s also inspiring to know that we do the work that we do to put an end to this.”

DASAS hosted its annual candlelight vigil to remember victims of domestic violence Tuesday at the Cass District Library in Cassopolis.

At the vigil, hosted every year in October for Domestic Violence Awareness Month, the names of every fatal victim of domestic violence Cass County, St. Joseph County, Van Buren County and surrounding areas since 1971 are read aloud. The vigil also hosts speakers who talk about why highlighting the issue of domestic violence is important.

“We feel this is offering the Cass County community a chance for healing,” Hackworth said. “There is so much sadness that goes around with domestic violence, especially when someone loses their life to domestic violence. We don’t just want to help people gain awareness of the situation, but to also let people know that there is help, hope and healing.”

“This gives a voice to those who can no longer speak for themselves,” she said. “This is a way for us and loved ones to honor those who have lost their lives at the hands of someone who was supposed to love them. I like that [the vigil] gives that opportunity for remembrance and to honor that person.”

The theme of this year’s vigil was “shine a light,” in order to bring the topic of domestic violence out of the darkness and into the public awareness, Ludwick said.

“Even though it is 2018, [domestic violence] is still seen as a family issue, but it’s not. It affects the whole community,” she said. “You can’t heal from violence if it is hidden. So, we want to shine a light. We want to open a door to show that people can reach out to.”

To help shine a light, domestic violence survivor Annay Razo, of Dowagiac, spoke at the event. She described how the cycle of abuse is created, and how the public needs to be educated about domestic violence in order to break it. For Razo, her cycle began by watching her mother in an abusive relationship, which led to her following those patterns as an adult in her own relationships. Thanking DASAS and the Dowagiac Police Department for helping her in her time of need, Razo said it took help, determination and a love for her children to help her escape the cycle of abuse.

“Don’t be afraid to reach out for help, and to tell people what is happening to you,” she said. “There are people who will help you.”

It is stories like Razo’s — and those of the 64 men and women whose names were read Tuesday — that will help shine a light on the topic of domestic abuse, Hackworth said, adding that she hoped someone in attendance was able to heal in some way from the vigil.

“By shining a light tonight, we wanted to show that the hurt can’t hold you back anymore,” she said. “We want to unmask the pain and help people heal.”