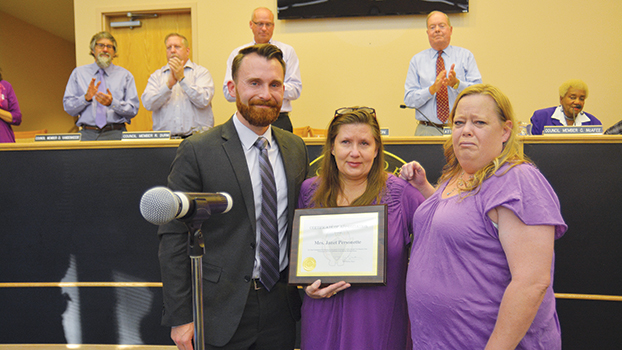 Personette passed away Saturday after a battle with stage four cancer. She was known to many community members for her many volunteer endeavors, including the Niles Salvation Army, Four Flags Chamber of Commerce, Ferry Street Resource Center, Support the Fort and the Optimist Club, to name a few.

Council members and residents alike who attended the meeting paid homage to Personette by wearing her favorite color: purple. Personette was often clad in purple clothing and was known to many in the Niles community as “the purple lady.”

Personette religiously attended city council meetings and was apt to share with city leaders her thoughts and ideas for making Niles a greater place to live. In her honor, the meeting included a moment of silence for Personette. Mayor Nick Shelton then presented a certificate of appreciation to recognize Personette’s efforts. The award was given to her daughters Teddi Kella and Reeni Hyatt.

Shelton described how he was told he needed the “purple lady” on his side. In 2015, he said he and Personette’s friendship began. She would often hold impromptu discussions with Shelton while he was working at Shelton’s Farm Market to give him an inside scoop into the happenings of the Niles community.

“She was a friend of the community and a friend of mine,” Shelton said. “I can say that we will definitely miss her.”

Council members who had known Personette throughout the years also said they had come to know her tenacity and love for her city of Niles.

Council member Gretchen Bertschy said Personette provided insight to her while she was new to her role as council member.

“We are going to miss her,” Bertschy said. “Her advice was always spot on.”

Council member Bob Durm said he had known Personette for about 26 years. Though she had passed away, Durm said council members would continue to feel her presence at council meetings in spirit.

“Jan’s love of the city of Niles was unparalleled,” Durm said. “She will still be here. She will be here every meeting, we will feel it.”