Dowagiac spikers get past Bulldogs 3-1 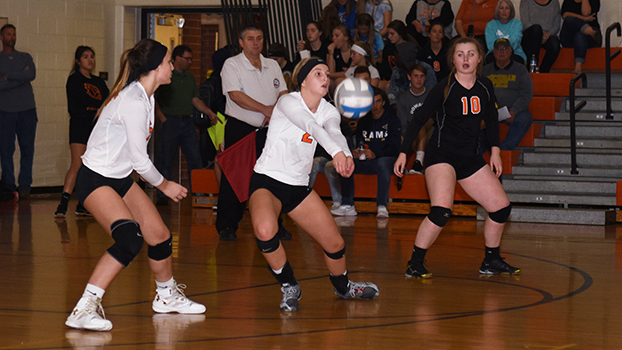 The Chieftains are now 15-10 overall and 2-5 in conference matches.

“We needed this win tonight,” said first-year Dowagiac coach Tony Hooley. “The girls have been working hard through sickness and nagging injuries. It felt like we were getting closer in our conference matches, but we weren’t feeling the reward for our efforts.”

Dowagiac dominated the Bulldogs in the opening two sets before Otsego finally was able to stop the momentum.

It was a struggled in the third and fourth sets for the Chieftains, but they found a way to pull it out in the end.

“The team played well in the first two sets with some of the most efficient volleyball to date,  Hooley said. “While we did struggle in the third and parts of the fourth sets, we pulled out a win, which could go a long way in the mental development of the team. Sometimes a team needs to learn how to win as much as how to improve their skills.”

Dowagiac is back on the court Thursday night at the Dowagiac Middle School as it hosts South Haven.

Dowagiac led 3-0 at halftime and went on earn its fourth league victory of the year. The Chieftains are now 4-3-1 in conference matches.

Cristian Wilson had a pair of goals for Dowagiac, while Ben McCrory added the third goal.

Cole Parker had an assist for the Chieftains, who travel to Paw Paw tonight for another Wolverine Conference match.

“We controlled most of the game and played our game and the way we know how to,” said Dowagiac coach Mike Williams. “We need to work on slowing the game down when we have a lead and not forcing or making more things happen when we already have the lead. Those are easy fixes that we can make in preparation for playoff time.”

The Chieftains also won the JV match against the visiting Rams, 4-1.

Jordan Simpson, Cole Weller and Tommy Bermudez all scored for Dowagiac, which also got a South Haven own goal.

“We are getting more consistent with our playing effort and energy has been there last couple games starting to put complete games together,” said Dowagiac coach Joey Pasternak.

Bob Turner was also honored as the Wolverine Conference Coach of the Year.