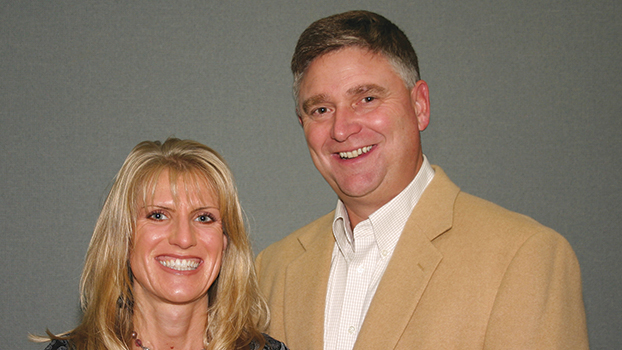 BENTON HARBOR — Lake Michigan College has announced a new name for its future wine and viticulture building. The teaching winery currently under construction on LMC’s Benton Harbor campus will open in 2019 as the Welch Center, named after longtime supporters of the college, Mike and Lisa Welch.

The announcement was made Sept. 25 during a private event at The Mendel Center.

The honor was bestowed on the couple not only for their financial generosity toward the construction of the wine center, but for their years of service to the college.

“The legacy of leadership and generosity shown to this college by Mike and Lisa Welch over the years has been nothing short of transformative. Their impact will be felt for generations to come,” said LMC President Dr. Trevor Kubatzke.

For more than 16 years, the Stevensville couple has volunteered on numerous LMC boards and committees, including the Winner’s Circle Scholarship Benefit Auction as event chairs in 2010, and Lisa continues to serve on the auction’s executive committee. She also serves on the board of Lake Michigan Vintners teaching winery and tasting room.

Mike has served on the LMC Foundation board since 2002, and was board president from July 2012 to June 2014. During the Foundation’s Campaign for Tomorrow, Mike provided leadership as a cabinet member, helping to raise $8 million for the wine center and the Hanson Technology Center.

In 2011, they established the Mike & Lisa Welch Family Endowed Scholarship, and in 2018 were awarded with LMC’s Bernard Radde award.

Mike is a Lake Michigan College alumnus and graduated from Western Michigan University. He is the president of Magnate Worldwide and founded the freight expedition company Express-1. Lisa is a graduate of Edwardsburg High School and Michigan State University.

The new $7 million Welch Center will replace the temporary two-room laboratory set up in The Mendel Center when the program launched in 2015 to support the region’s rapidly growing wine industry.

The 1,400-square-foot building will be located on LMC’s Benton Harbor Campus, north of The Mendel Center. It will include a large tank room, bottling room, barrel room, dry storage area and a laboratory. There will be classrooms, offices and an open commons area to encourage student collaboration, special events, and tastings.

Students in the program study enology (winemaking), viticulture (grape-growing), and business. Graduates earn associate degrees in applied science in wine and viticulture technology. More information about the program can be found at lakemichigancollege.edu/wine.