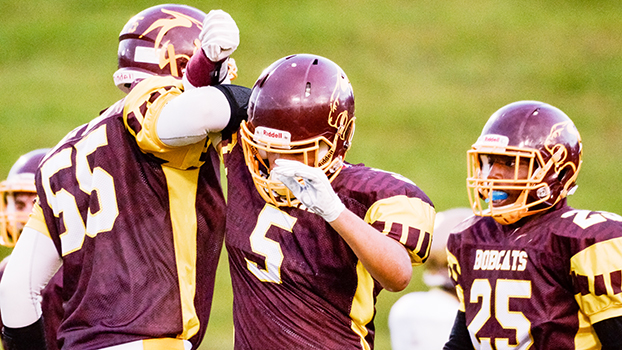 NILES — It was the right place and the right time for Brandywine to play as well as they have lately.

With a homecoming crowd and the inaugural Athletic Hall of Fame class there to witness this year’s Brandywine football team they all left impressed and satisfied.

The Bobcats’ Ryan Clingaman recovered a fumble on South County’s (0-7) first play of the game.

Junior running back Jordan Abrams scored his first of four rushing touchdowns on the very first offensive play of the game to help Brandywine (5-2) easily shutout the co-op Bridgman/New Buffalo team 58-0 to clinch the BCS Conference Blue Division for the first time since 2013 and one win away from automatically qualifying for the state playoffs since 2014.

Brandywine head coach Mike Nate was pleased with the overall play of his team.

“I knew we’d be ready tonight because of how much we had at stake,” he said. “The kids did a real good job separating the fun (homecoming) and game.”

After going up quickly 14-0 a high snap went over the head of South County punter John Davis to the back of the end zone to record a safety putting the Bobcats up 16-0. The very first play of

Brandywine’s next possession, senior quarterback Bryce McLane throw a quick out to junior receiver Shane Brown for a 29-yard score to put the Cats up 22-0.

Before the end of the first quarter, Abrams rushed in for his third touchdown of the game on a 52-yard cut back run to put the Cats up 29-0.

Defensive struck again in the second quarter as freshman Ivory McCullough intercepted a tipped pass and returned it 43 yards for a touchdown. From there South County requested that a running mercy clock begin with seven minutes left in the first half.

“I’m very pleased with the defense getting that shutout and having another opportunity to play our younger guys,” Nate said. “Everybody contributed in some way to this victory. It was a true definition of a team win.”

Sophomore quarterback Gabe Gouin took the helm in the second half finishing with two carries for 51 yards and a touchdown. Sophomore kicker Bryce Taberski finished it off kicking a 28-yard field goal in the fourth quarter, the first field goal made by Brandywine since 2010.

Brandywine has now scored over 300 total points for the sixth time in the last seven years. This was their first shutout victory since 2016.

Abrams finished with five carries for 133 yards and four touchdown runs (18, 51, 52, 6) reaching the 1,000-yard rushing plateau with fellow sophomore running back Robert Gordon, who finished with nine carries for a season low 69 yards and a touchdown. Abrams now has 1,021 rushing yards and 16 touchdowns on the year. Gordon has 1,183 and 19 touchdowns.

South County was held to 117 total yards of offense led by freshman running back Matt Mulligan with 24 carries for 91 yards.

Brandywine travels to Parchment (1-6) Friday night. The Bobcats will be looking for their first-ever win over the Panthers.