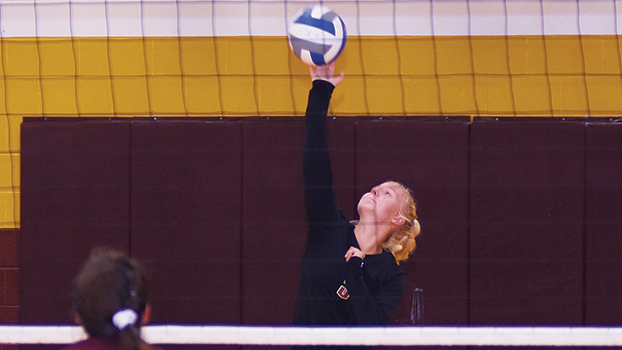 The Bobcats completed the sweep of their division with a convincing 25-8, 25-12 and 25-9 victory over arch rival Buchanan Wednesday night.

“Tonight, our goal was to come out and play with the same enthusiasm, consistency and aggressiveness we had on Monday against Niles,” said Brandywine coach Janet Markunas. “And that is exactly what we did. Every single one of the girls came out ready to play tonight. Our defense played the best they have played so far this season. A lot of that credit goes to my libero Megan Schmidt. She had a great game both defensively and in serve receive.”

Markunas knows that without good passing, the Bobcats would not be able to set up and run their offense.

“It gives our setter (Audrey Longley) a chance set up a lot of options for the hitters,” she said. The chemistry between hitters and her has just been incredible. My hitters really stepped up their game tonight as well, and were not only aggressive, but very consistent, with only two hitting errors out of 36 kills, all because were finally able to run the fast offense we’ve practicing non-stop.”

Schmidt finished the night with a team-high 18 digs, while sophomore Kylie Myers and junior Bethany Duval had 13 and 12 kills respectively.

“Kylie put down every ball she touched tonight,” Markunas said. “She was a force at the net outside, middle, and right side. She led the team tonight offensively, along with Bethany Duval, Olivia Thomas, Nicole Sachman and Kristen Alvord.”

Buchanan was unable to mount any type of consistent offense due to the big front line of Brandywine.