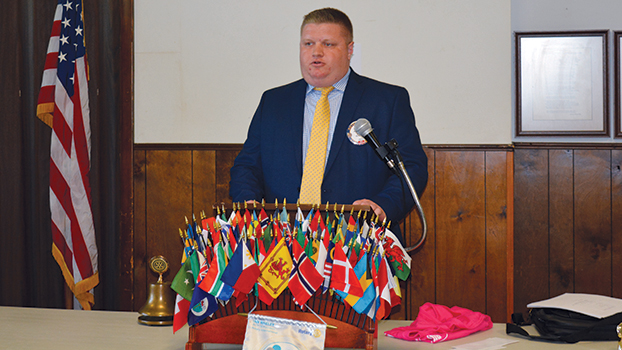 DOWAGIAC — Standing in front of the Dowagiac Rotary Club, Vice Chair of the Lee Memorial Foundation Jeremy Truitt held up a pink shirt and told the club that real mean wear pink.

“This is what we do in October,” he said. “It’s for a good cause, and it can mean so much to the community.”

Truitt presented to the club to raise awareness about the Lee Memorial Foundation’s upcoming Tree of Love fundraising campaign.

Nearly one in every five women can’t afford the insurance coverage or the money to get a mammogram that can help them detect breast cancer early, according to the American Cancer Society Action Network.

To help bridge that gap, the Borgess Lee’s annual Tree of Love campaign was created. The Tree of Love uses donations to provide mammograms to the women who cannot afford them. The Lee Memorial Foundation, the charity wing of Dowagiac’s Borgess-Lee Memorial Hospital, has raised money through Tree of Love to provide Cass County women with potentially life-saving breast cancer exams for the last eight years. As with past years, the campaign will culminate with a tree lighting ceremony, which is scheduled to take place on Nov. 28, at Farr Park outside the hospital. This year, the campaign has a goal to raise $10,000.

“This is for the women in our community who are affected by breast cancer, specifically those who are uninsured or underinsured,” Truitt said.

The campaign will kick-off with a “pink out” football game on Friday, Oct. 12, at the Dowagiac home field. Those wearing pink can enter the game for a $1 donation, and the school district will match the money raised.

“This is something we have been doing for about four years now, because we had a peculiar situation where we were raising more money than people were using,” Truitt said. “So, we thought we would join forces with the schools to raise awareness about Tree of Love.”

Outside of the football game, individuals can donate either directly or at Honor Credit Union.

Truitt said he knows that many, including himself, know women who have been affected by breast cancer. He said that if the Tree of Love can help save even one woman by helping her detect breast cancer early, it is worth it.

“This is a great program in a great community,” he said. “With everything coming up in the next week, I’m excited to see everyone come together for a good cause.”