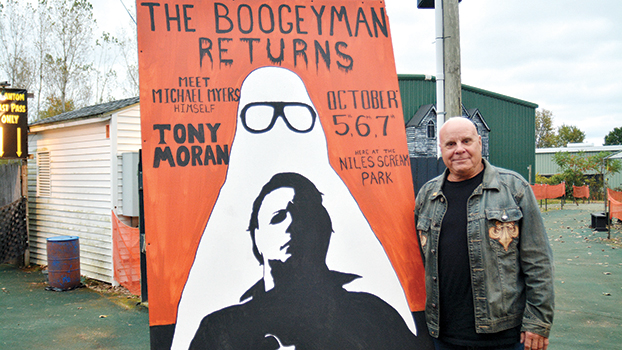 Actor Tony Moran, who played the unmasked Michael Myers in “Halloween,” is pictured at the Niles Scream Park. Moran will be available to meet fans and sign autographs at the park through the weekend. (Leader photo/KELSEY HAMMON)

NILES — When 21-year-old Tony Moran was offered a part as psychotic killer Michael Myers in the 1978 movie “Halloween,” he was less than thrilled at scoring the role.

Despite being a starving artist at the time, Moran said horror movies were not well respected among the actor circuit. Moran felt even the title of the slasher film was ridiculous.

“How corny can you get? A horror movie called ‘Halloween’ That’s just corny.”

It was not until years later when fans started acknowledging him for the performance that Moran began to come around to the idea of playing Michael Myers.

This Halloween season — the 40th anniversary of the movie’s creation — Moran left his Los Angeles home to tour the country to meet with fans. This week, Moran is making a stop at the Niles Scream Park. Moran will be at the park during opening hours from Friday through Sunday. He will be available on the park’s Midway, where he will sign autographs and engage with fans. There is no fee to enter the park to see Moran. Pictures and autographs are $20 each, an autographed 3-D picture is $40 and selfie is $10. Sales are cash only.

“Halloween” was a low-budget, independent film directed by John Carpenter and released in 1978. Today, it is hailed as a Halloween cult classic by fans.

The slasher film is about Michael Myers, a convicted murderer who killed his sister when he was a boy. Myers is locked up in prison, but manages to escape while he is being transferred in preparation for a court date.  Clad in the iconic and chilling mask that hides his facial features, Myers returns to his hometown in search of new victims.

Moran said his agent persisted and encouraged him to take the role. Eventually, he decided to accept the part when he learned one of his favorite actors, Donald Pleasance, had a part in the movie as psychiatrist Dr. Sam Loomis.

“I was a huge fan of [Pleasance],” Moran said. “He is a classic British actor. And I said, ‘you’re going to tell me that Donald Pleasance is in this movie? There is no way he’s in this movie.’”

Moran said the interview consisted of little more than chatting with the director about everyday life. Moran said Carpenter decided to pick him of the role because he thought he had “an angelic face.” Moran was chosen to share the role of Michael Myers with Tommy Lee Wallace and Nick Castle – the actor who will be resuming the role in the 2018 sequel, also titled “Halloween.” Moran, however, was chosen to play the pivotal scene when Myers is finally unmasked.

Though Michael Myers was Moran’s first acting gig, he said he does not consider it to be a breakout role. For years, he kept his involvement in the film quiet. When he submitted a resume for other jobs, he did not even list the part in his experience.

“I was ashamed of it,” Moran said. “I had to wear a mask. Back then, that was the very first movie they used a mask, everything else was all makeup before that.”

The mask was made of latex and stifling to wear, Moran said. The actor also had to coat his hair in Vaseline for the part, because the mask was otherwise near impossible to remove.

In the early 2000s, Moran started taking part in horror conventions, where fans and stars alike get to mingle. It was here that Moran met a number of fans and began finally reconciling with the role.

“I am one of the most blessed humans walking the earth, because nobody, especially me thought this movie was going to turn out to be what it was,” Moran said. “I have got the greatest fans in the world.”

Looking back on the movie, Moran said he knew then, even as disgruntled actor, that “Halloween” was different than the average slasher film.

“I know a lot of scary movies where it is just so far out there it could not happen, basically fantasy,” Moran said. “‘Halloween’ was sort of like this could really happen. Some guy breaks out of the psycho ward and starts killing people. It could happen.”

Moran would make several guest appearances on shows, following his role as Myers, including CHiPs. He would also go on to produce some his own work including, “Beg,” an independent horror film. In his 30s, Moran put aside his acting career and began working in mortgage business.

“This haunt is huge and they take really, really great pride in what they do,” Moran said. “It’s the Midwest, and the people just seem to be nicer than the West Coast and the East Coast. I feel at home here.”