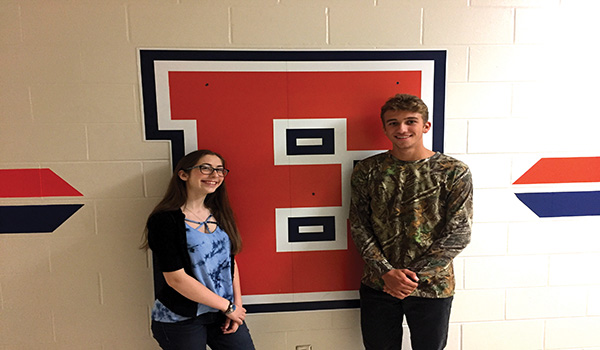 EDWARDSBURG — Every fall, thousands of high-achieving high school seniors from across the country wait as they anticipate whether or not they will be named a National Merit Semifinalist.

This school year, two Edwardsburg students were deemed worthy of this honor — Natalie Rarick and Ian Wagner. In order to go from semifinalist to finalist, both students must complete an application that includes an essay, letter of recommendation, high school transcripts and more.

“One of my best friends was a semifinalist last year, so I kind of knew what it entailed,” Rarick said. “Obviously it’s a great help with college, so my mom and I immediately started researching just how far it would get us, and what we could do with the scholarship. We found some great results.”

Approximately 16,000 students from the United States were named semifinalist by the National Merit Scholarship Corporation.

“To have two [semifinalist] in one year is a pretty big deal,” said Ryan Markel, Edwardsburg High School principal. “I looked at it, and it’s been 20 years since we had two in the same year. Of course, they still have to go through the process to be named a finalist, but to have two named a semifinalist is kind of exciting.”

Roughly 15,000 semifinalists are expected to become finalists, with more than 7,500 likely to be named National Merit Scholars.

Students qualify for the scholarship competition by taking PSAT/NMSQT during their junior year or second to last year of high school. If they score high enough, based on the designated qualifying score for their state, then a student will be named a semifinalist, just like Rarick and Wagner were.

Both Rarick and Wagner credit Edwardsburg Public Schools with helping them develop as students.

“I think Edwardsburg, even just the high school, is not only very academically encouraging, but also morally encouraging,” Rarick said. “They really work to support everyone and help everyone succeed to their highest potential.”

“For such a small school we definitely have a lot of opportunities to challenge ourselves,” Wagner said.

In the meantime, both students will be finishing their National Merit applications, while also applying to a number of schools. Both said the possibility of becoming a national merit scholar increased the number of schools that they were considering because several universities, such as the University of Alabama, offer full rides to National Merit Finalist who pick them as their first choice.

Rarick and Wagner will find out at the beginning of 2019 if they moved on to the finalist round of the scholarship competition. From there, scholarship winners are announced throughout the spring and early summer.

Wagner said that he plans to apply to 17 schools and is considering studying engineering or physics before he pursues a career in renewable energy. He has played soccer all four years of his high school career.

“We’re both kind of similar in that we want to study a lot of things,” Rarick said. “We really are looking for the best combination of things that will suit us right now and in the future. I’m very passionate about English and performance in musical theater, so I’m looking to double major right now musical theater and English with a minor in psychology.”

While both of students still have several months of tests, applications and time with their friends left ahead of them, they’re both also looking forward to a promising future. But do not be fooled, the honor of being a National Merit Semifinalist has not gone to their heads.