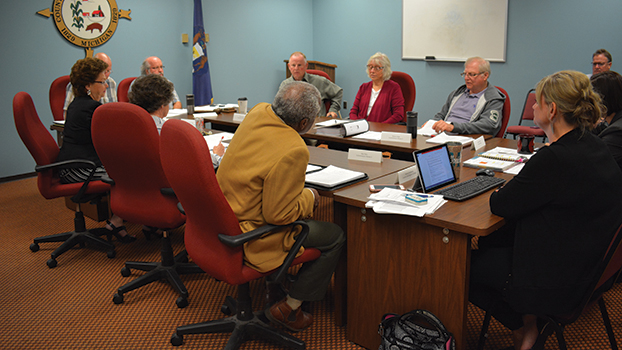 CASSOPOLIS — Cass County Commissioners are deciding whether they should just say no to recreational marijuana.

During the Committee of the Whole meeting Tuesday, the Cass County Board of Commissioners discussed whether it should pass a resolution opposing the legalization of marijuana. The resolution created division among commissioners and raised questions about the legality of the resolution itself.

The resolution, drafted by Cass County Prosecutor Victor Fitz, calls for the board to make a public statement that it opposes a proposal on November’s ballot to legalize recreational marijuana and encourages other communities to do the same.

The resolution cites data from states that have legalized marijuana, specifically Colorado, that recreational marijuana has led to increased school suspensions and expulsions for children and marijuana-related driving fatalities have increased under legalization. The resolution also cites studies from The National Institute on Drug Abuse that links marijuana with lowered IQs and mental illnesses, including psychosis, depression and anxiety.

“All of law enforcement has been deeply involved in the opposition of legalization,” said Commissioner Roseann Marchetti.

Commissioner Clark Cobb said he did not believe the board should weigh in on ballot issues and even questioned the legality of approving such a legislation.

“I think we should let the people decide,” Cobb said. “And I’ve always thought it was against the law for us to weigh in as a commissioner on any ballot proposal. I thought we were not supposed to weigh in on that.”

“I’m not too much in favor of this from the standpoint that we should let the voters decide for themselves,” he said. “I’m not sure we should be throwing this thing out.”

Though the board has a long history of drafting resolutions either supporting or opposing legislative matters — just last month the board approved a resolution to oppose Senate Bill 1031 — the legality of taking a governmental stance on voter ballot initiatives is murkier. In fact, a similar resolution opposing marijuana legalization in Livingston County, Michigan was voted down in June due to legal ambiguity. The decision in Livingston County cited the Michigan Campaign Finance Act, which affects a governmental entity’s ability to take a position on a ballot issue and prohibits the use of public funds and resources to oppose or support any ballot proposal.

Despite concerns from fellow commissioners, Commissioners Marchetti and Michael Grice said they thought the resolution should still come up for a vote.

“If you are not in favor of [the resolution], by all means vote against it,” Marchetti said.

“I think we should present it,” Grice added.

Ultimately, the Cass County Board of Commissioners decided to postpone a vote on the matter until an attorney is contacted about the legality of the resolution.

Prosecutor Fitz will still present to the board during Thursday’s regular meeting about recreational marijuana and the need to oppose it.

“We can listen to him and then decide,” Marchetti said.

Also Thursday, the board of commissioners will vote to approve a grant acquired by Cass County Courts. The grants include: $176,000 Swift and Sure grant, a $98,000 family treatment court grant, a $10,000 Michigan Drug Court Grant Program Planning grant and a $120,000 Byrne JAG Grant.