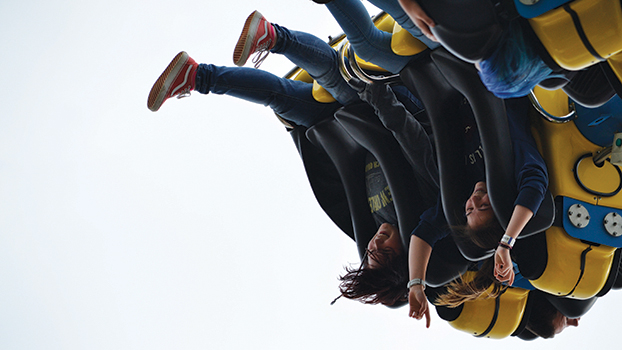 NILES — Sunny skies and crisp, but not too cool, fall weather were factors that helped to make this year’s 46th annual Four Flags Area Apple Festival a success.

The four-day event, with the theme Ride the Waves to Festival, officially came to a close Sunday night. Stacy Walsh, the president of the Four Flags Area Apple Festival board, described it as an all-around “record breaking” festival.

“We just had another good year,” Walsh said. “And we sold a lot of apple products. We did really good in parking. But we had really good weather and that’s what usually makes us or breaks us.”

While rain was in the forecast, the festival saw only a few showers on Thursday, Friday and late Saturday which Walsh said did not appear to dampen overall attendance.

“Saturday and Sunday were so nice that I think it made up for it,” Walsh said.

Temperatures, which wavered in the 60 to 70-degree range, seemed optimum for the festival and the Grande Parade, which took place Saturday afternoon and saw the participation of more than 100 floats and took more than two hours to complete.

While the Apple Festival is free to attend, those that park on the grounds are asked to pay a $5 parking donation. Organizers said there were about 7,000 cars parked throughout four days. On Saturday and Sunday, parking lot attendants had to ask people to park at National Standard, 1631 Lake St., because there was no more room on the grounds. A number of people also chose to park on adjacent streets or at Niles High School. As for the amount of people, Walsh said they do not have an official count on the number who attended yet.

In addition to carnival rides, there were more than 100 arts and crafts and more than 60 food vendors to choose from. Those who attend the community tradition also had the chance to take part in a host of competitions for cash prizes. Walsh said this year’s contests saw avid participation, except for the car show, which saw a decline.

Walsh said the lip sync contest, where people perform a lip sync and typically a dance to a song of their choosing, was a hit. She said there were 17 competitors and participants from ages 7 to 70. This year, many people took their props to the next level, she said. Competitors Jennifer Fox and Jared Wagner dressed like pigs for their performance of “Shake it off” from the movie “Sing,” a movie where pigs can belt out lyrics, alongside a number of other animals.

With a number of great entries, Walsh said it was not easy picking a winner.

“They were all really good,” Walsh said. “It was hard.”

While there were a number of traditions like log sawing, pie eating and seed popping contests, festival organizers also brought a few new things to the event, too.

For the first time, there was Backyard Barbecue Grill-Off competition. The cook-off drew 17 competitors from across Michiana, as well as other states to compete.

The board is expecting to bring the barbecue cook-off back to the Apple Festival next year. Organizer of the cook off, Tom Nyhuis, said next year they hope to offer a People’s Choice award and involve the community in taste testing the barbecue.

Tickets for carnival rides were also offered at a discounted price online and Walsh said this seemed to be a big success.

Country musician Chris Higbee performed Saturday night to a full tent, Walsh said. Due to rain, Walsh approximated that there was only about half the crowd for the Three Men and a Tenor performance.

While the festival grounds may have only recently been cleared, Walsh and festival organizers already have next year’s Apple Festival, slated for Sept. 26 to 29, in mind. In addition to bringing back some of this year’s successful events, Walsh said they will look to reduce line times by increasing the number of ticket booths. Board members will also be going over suggestions that they received from the community for next year’s festival.

Walsh said she looks forward to seeing the growth at the festival every year.

“Overall it was a really good weekend and we are thankful for that,” Walsh said. “[It’s] just getting bigger and bigger every year.”