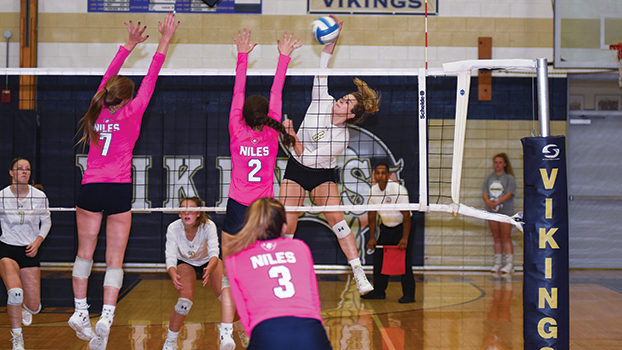 Brandywine’s Bethany Duval (above) collects one of her 11 kills against Niles Monday night. The Bobcats swept the Vikings 3-0. Niles senior Abbie Harpenau (below) delivers a back set. (Leader photo/SCOTT NOVAK)

Brandywine, despite being 26-2 entering the match, is unranked. Niles, with a 16-17-2 overall record, is an honorable mention selection in the latest Michigan High School Volleyball Coaches Association Division 2 poll.

A win over the Vikings by the Bobcats could be validation for Brandywine, which reached the Class C regional semifinals before bowing out to eventual state champion Bronson last November.

Following Brandywine’s 25-11, 25-16 and 25-16 sweep of the Vikings, who reached the Class B state quarterfinals a season ago, Bobcat coach Janet Markunas said her team had a point to prove Monday night.

“Playing them is always tough,” Markunas said. “Niles is always good. They are a Class B school. I love playing them because it is always good for us. No matter what, we always learn something by playing them. I am proud of them. There were a few mistakes here and there, but I think everything is starting to come together.”

Not only are Niles and Brandywine crosstown rivals, but most of the girls that took the court Monday night are members of the Krush Volleyball Club in Niles.

They are teammates during club volleyball season and most of them have been coached by either Markunas or Niles coach Jenny Nate at some point.

That makes for some awkward moments, but it also provides each player motivation to step up and give their best.

“It is harder,” Markunas said. “Some of us have coached them, so it is really hard to be competitive because you have coached some of them and you feel for them. It was Abbie’s (Harpenau) senior night. She is an excellent player. I love watching her all these years. It was hard for me because I do care for all those girls.”

Brandywine senior setter Audrey Longley echoed her coach’s comments about the victory and about playing on the same court with club teammates.

“It was humungous,” Longley said. “This is biggest game of the year by far and we trained so hard to play like we did tonight. I really played off. I am very pleased.”

Longley said it is tough to play against people you care about.

“It is hard because I love these girls,” she said. “I play with them all the time. It is really hard because they know how I play and I know how they play. Knowing that, it gets really hard to fake them out. But I just love them.”

The foursome combined for 31 kills and eight blocks.

Nate said that she kept trying different combinations in hopes of finding six players who would step up to the challenge.

“We are coming off of our best play of this season five days ago at Mattawan to having one of our roughest nights of the season tonight,” she said. “We have battled being able to maintain confidence, consistency, energy and communication issues this season, and we are working daily to find a combination of six players on the court who can bring intensity and control all of those factors for an entire match.

Harpenau finished with five kills, six blocks and three digs for the Vikings, while fellow senior Trystin Schlutt had four digs and an ace.

As well as the Bobcats played against Niles Monday night, Markunas said there is still room for improvement.

“There are still some things we need to push through consistency-wise,” she said. “I have less to complain about, but we missed some serves at key times. We just need to learn to keep our intensity up at all times. Every point has to be played hard, not just the big points.”

Nate said her team will get back to work trying to put the right pieces in place as the season winds down and the postseason looms near.

“We have had some big wins and some tough losses this season, and we will continue to strive to improve and find the chemistry that we need to pull out the wins every single match,” she said. “We will head back to the gym tomorrow to prepare for Portage Northern Wednesday.”

The Vikings travel to Portage for a SMAC West Division match tonight.

The Bobcats are hosting another rival, Buchanan, in a BCS Athletic Conference Red Division match tonight.