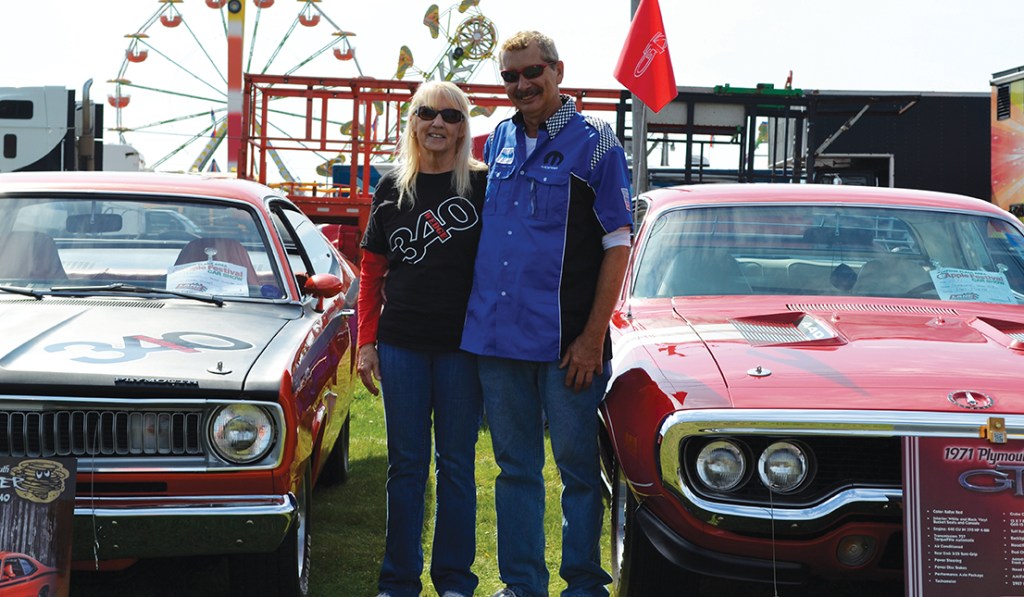 Linda Hurst and Ron Pieta, of Niles, pose in front the cars they showed at the 19th Annual Apple Festival on Sunday. (Leader photo/EMILY SOBECKI)

“We got a lot of cars here,” said Alex Phillips, the chairperson for the Apple Festival car show. “We’ve got 50/50 going. We’ve got door prizes. We’ve got DJ Joe Carroll here doing our music and doing our announcing. It’s a beautiful day out.”

Registration for the car show began at 9 a.m., but Phillips said that several dedicated vehicle owners showed up at 7 a.m. By the early afternoon, rows and rows of colorful vehicles with pristine paint jobs covered the field.

A number of contests and activities were going on throughout the shows.

There were awards for best of show, won by Lylia Cooper with a 1968 Chevy Camaro; best interior, won by Shawn Mullins with 1937 Ford Roadster; best paint, won by Rob Richez by 1947 Chevy Pickup and best engine, won by Bonnie Orszulak with at 1967 Chevy Camaro.

“We have five judges we go through and they have judging sheets,” Phillips said. “We score accordingly to what they think. Good paint. Good engine, good trim and fit. The doors and how everything lines up and then how everything is pulled together in the car for best of show. That’s how we do that.”

But car show participants enjoy taking part in the show, whether they are going to win something or not.

Joe Blank, of Edwardsburg, participates in at least a handful of car shows each year using his 1949 Plymouth with a Chevy 350 engine. Both the exterior and engine of the vehicle dote a bright pink paint job.

“[The color is] close to Pepto-Bismol,” Blank said. “Years ago, I walked down a Walgreens Drugstore, and I saw this little Nerf Ball. It was bright pink and green. So, I bought the ball and had the paint match to it.”

This is his sixth or seventh year participating in the Apple Festival Car Show.

“I travel with two other couples and it’s just nice,” Blank said. “I get to talk to people [like you]. People come up and want to find out about it and I try to be social about it.”

Car shows can also make for a great date.

Linda Hurst and her boyfriend, Ron Pieta, have participated in several car shows this summer, including the show Sunday at the Apple Festival.

“It’s my first year to do it,” Hurst said. “And it’s just been amazingly fun. It’s fun to drive and it’s great to get an award once in a while.”

She shows Pieta’s orange 1971 Duster 340 car, while he shows his red 1971 GTX. This summer, Hurst said she has won about seven trophies.

“I’ve had to create a shelf at home to put them all on,” she said. “Thanks to him. He lets me drive his car so I’m very appreciative of that.”