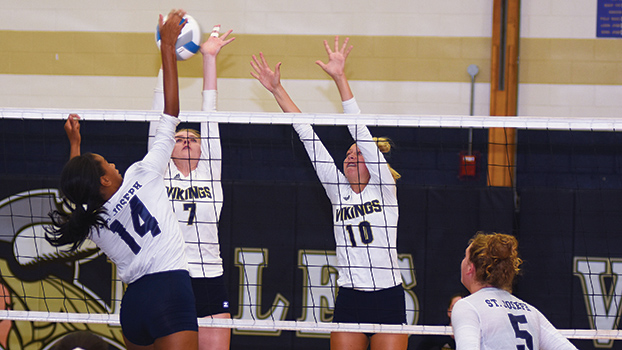 Abbie Harpenau (7) had 36 kills and three blocks for Niles at the Bronson Invitational on Saturday. (Leader photo/File)

The Niles volleyball team lost in the semifinals of the Bronson Invitational on Saturday.

“We are still focusing in daily on finding consistency as a team,” said Niles coach Jenny Nate. “We did a lot of good things today, but we still have a lot to work on.  We have to find a way to maintain consistency and confidence in all aspects of our play.  Bronson runs a very fast offense, and that caused us some trouble.  We did make progress adjusting to the tempo, and we played them much tougher in the first set in semifinals.  We will regroup and continue to prepare for every new match with intensity and focus.”

Abbie Harpenau had 36 kills and three blocks for the Vikings, who also got 26 kills, six blocks and 21 digs from Nikki Nate.

The Vikings will host Brandywine (26-2) in a  non-conference match scheduled to begin at 6  p.m. today.

It will also be senior night for the Vikings.