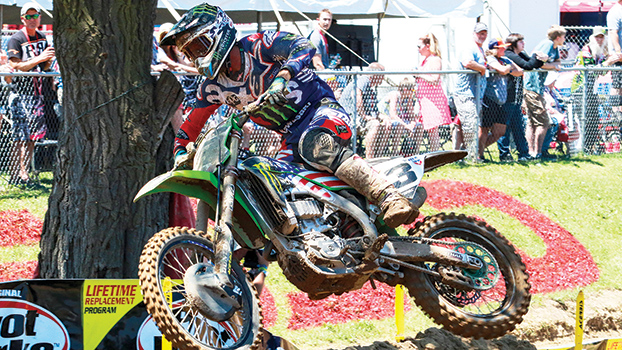 Eli Tomac will lead Team United States into the Motocross of Nations at RedBud MX this weekend. (Leader photo/File)

BUCHANAN — For only the fourth time in its long history and for the first time in the Midwest, the Motocross of Nations is coming to America.

And not only is it coming to the Midwest for the first time, it is coming to one of the most famous motocross tracks in the United States — RedBud MX in Buchanan.

The Monster Energy MXoN will be held Saturday and Sunday at the iconic track.

Tim and Amy Ritchie began talking with YouthStream, who own the rights to MXoN five or six years ago.

“We threw out hat into the ring,” said Amy Ritchie. “We just wanted to make that connection. I am sure they were aware of our national event on Fourth of July weekend. We are known as ‘America’s track’ and the American motocross industry put a bug in their ear.”

The United States will be looking to snap Team France’s four-year winning streak.

Ritchie feels that beside the fact that RedBud is known around the motocross world, it is much easier for teams and fans to get here.

“I think Denver was a little too far for the mostly European crowd,” she said. “Anybody can get to Chicago and then to here.”

It has not been easy for Tim and Amy Ritchie, along with their staff, to get RedBud prepped for the MXoN.

“It was not official, but this all started in March of 2017,” Ritchie said. “We thought they were coming to Daytona Bike Week and announce that we would be hosting in 2019. But the call I was waiting for said they were not coming in 2019, but in 2018. We really had to ramp things up.”

The real communication about what was needed from RedBud in order to host really did not come until the end of the summer according to Ritchie.

Tim Ritchie got busy reworking the RedBud traditional motocross course to accommodate structures that would be needed to accommodate sponsors and special “gold” ticket holders.

“We did not have a section of track big enough to accommodate those structures,” Ritchie said. “We had to huge scaffolding structures that are a part of their program and that sponsorships are built around. Like the one behind the starting gate where ‘gold’ ticket holders have suits and there are stalls for the teams to keep supplies. There is also a pit lane structure where the mechanics will be.”

RedBud had to create a loop for that structure.

“In the back section, we took out a pretty nice section of the race track, but for good reason,” Ritchie said. “It made a lot more room for spectators.”

Ticket sales have been brisk for the event, but there are still plenty of tickets available for purchase according to Ritchie.

The area dedicated for camping has been sold out.

“It is outselling any event in recent years,” Ritchie said. “I think there has just been a real desire to have it at this track. The campground is sold out, but that is just a limited footprint at the track. I do not want people to think the event is sold out. Fans will be able to purchase tickets at the gate.”