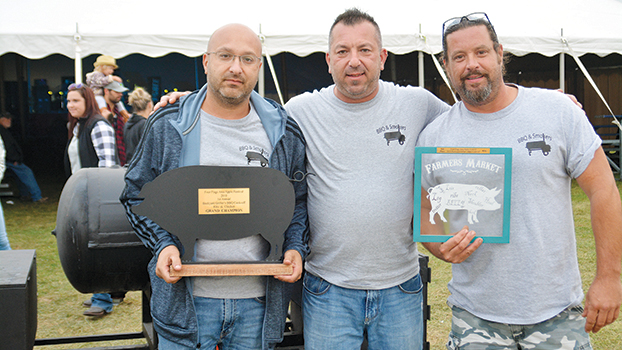 NILES — The tantalizing smell of barbecue mingled on the breeze all day Saturday as competitors across Michiana turned up the heat on an inaugural competition at the Four Flags Area Apples Festival.

The Backyard Barbecue Grill Off took place throughout the day Saturday and 17 competitors entered with the chance to win cash prizes. After grilling all day, judges would taste the barbecue and decide who was the master chef. This year, competitors were tasked with incorporating apple into their creations. The challenge inspired top-notch grill masters and those newer to the craft to visit the festival and fire up their grill.

After judges taste tested the barbecue entries, organizer of the event Tom Nyhuis announced the Grand Prize title holder: Thin Blue Swine. The team was comprised of brothers Steve and Joe Madison, of Mishawaka, and Kevin Hargis, of Edwardsburg. The trio formerly lived in Niles and said they were ecstatic about receiving the first-place win, which included a cash prize and a trophy shaped life a pig.

Nyhuis said the competition drew competitors across Michiana to the grill off, from the backyard grillers to master chefs.

One of the more novice cooks competing in Saturday’s competition was veteran AJ Hart, of Niles. By 1 p.m. Hart could be seen carefully dabbing a glaze of his signature apple butter jalapeno sauce over a thick rack of ribs. Wrapping the meat in foil, Hart eased it back into the smoker.

The scents drew an eager passerby to Hart’s tent to purchase some home style barbecue. Unfortunately, those who passed by could smell but not eat competitors’ efforts.

Hart spent 11 years serving in the military. His barbecue name at the contest paid homage to his military background and was called Smoking Freedom.

While Hart discovered his passion for cooking barbecue only four months prior, he said he wanted to put his skills to the test.

“I love barbecue and just started doing it a few months ago. My fiancé talked me into it [competing],” Hart said. “I said, ‘well, OK. Why not?’”

Helping out Saturday, Hart’s fiancée Courtney Molnar worked by his side and praised his barbecue skills.

Other competitors were intent on showing their grilling skills Saturday as they kept an eye on their smokers.

While Mike Purwin, of Wayland, manned his smoker, fellow competitor Joe Schultz, of Elkhart, jested that Purwin was going to be a tough one to beat.

Purwin, who was cooking for team Innuendo Barbecue, has competed in six barbecue cook-offs this year and is a member of the Great Lakes Barbecue Association, a nonprofit whose members help to raise funds for charity by doing what they love: cooking barbecue. Purwin is a top competitor for GLBA and said he was happy to see some good competition in Saturday’s contest. Purwin cooked up St. Louis-style spare ribs with a homemade dry rub and finished with a glaze.

The first cook off also inspired those who had never visited the Apple Festival to come to Niles and check it out.

Elkhart couple Tracy and Dave Axsom were among those who had never been to the festival, until they heard about the competition. Tracy and Dave run a catering company, Smokin’ Butts BBQ.

“A buddy of mine told me they were doing this cook off, so I got on and signed up and said ‘we are going to the Apple Festival,” Dave said.

By 7 a.m., the couple had set up their personal smoker and was preparing for a full day of grilling ahead. They found some ingredients for their barbecue inside the Apple Products Tent, where they purchased some local apple butter and apple cider for their cook.

So far, Tracy and Dave said they were enjoying being out at the Apple Festival for the first time.

Nyhuis said he expects the competition to return next year and said he is considering ways to get the community involved in tasting the barbecue for a People’s Choice Award. Overall, he ruled the first year a success.

“It went off really exceptionally well,” Nyhuis said. “We had a beautiful day for a competition. Every contestant was great. They all worked hard to put out their best.”