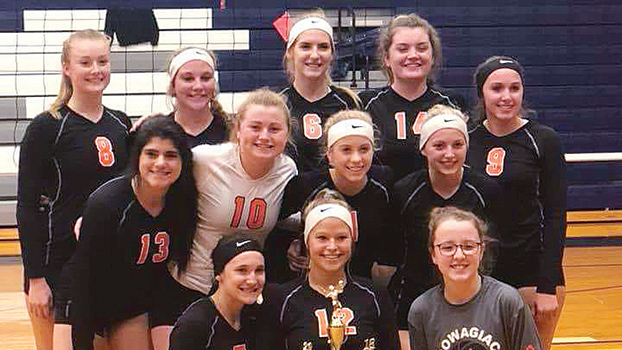 DOWAGIAC — For the second time this season, the Dowagiac volleyball team defeated Cassopolis for a tournament championship.

The Chieftains opened the season by defeating the Rangers at the Tracy Baker Memorial.

The two teams played twice at the River Valley Invitational on Saturday.

Cassopolis defeated Dowagiac 25-23 and 27-25 in pool play, but the Chieftains rebounded to defeat the Rangers 25-19 and 25-23 to win the championship.

“We started out a little sluggish, but improved as the day went on,” said first-year Dowagiac coach Tony Hooley. “We struggled receiving serve again, The girls tend to play it safe, passing too far off the net, which in turn, takes us out of our offense. The ladies put it together against Cassopolis in the finals and we were able to slug it out with their talented attackers and avenge an earlier loss to them in pool play.

Dowagiac is back on the court Thursday when it hosts Otsego in a Wolverine Conference match.