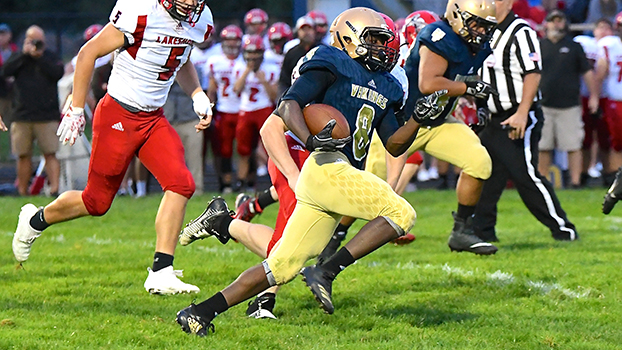 PORTAGE — Javond Ball rushed for 76 yards on 17 carries and scored the lone touchdown for Niles in their 28-6 SMAC West Division loss to Portage Northern Friday night.

The Vikings (2-4) got on the scoreboard first when Ball went 38 yards to paydirt.

It was all Huskies from there.

Portage Northern grabbed a 7-6 lead before the end of the opening quarter on a five-yard run and then scored a pair of touchdowns in the second quarter to take a 21-6 lead at halftime.

The Huskies scored on a 10-yard pass and a three-yard run in the second quarter.

Neither team found the end zone in the third quarter.

Portage Northern (4-2) capped the scoring with a 25-yard pass midway through the fourth quarter.

The Huskies outgained the Vikings 269-125 in total offense despite Niles running 54 plays to Portage Northern’s 49.

The Vikings finished the night with 61 yards on the ground and 64 yards passing at Bryce Lake was 8-of-18 with an interception.

Tysen Custard had a pair of receptions for 32 yards, while Ball caught four passes for 21 yards.

Terris Frick led the defense with 9.5 tackles, including two for a loss.