Stangers gets 100th win at Dowagiac as Chieftains rout Sturgis 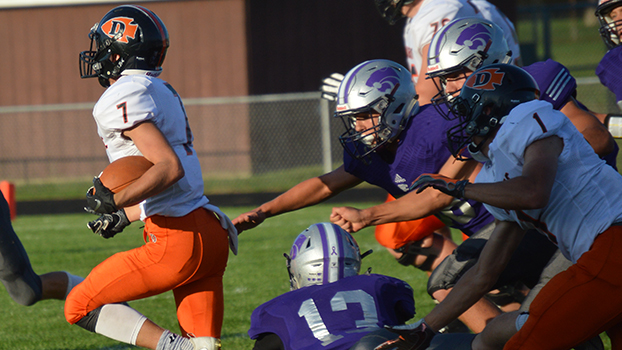 STURGIS — The Dowagiac football team put together one of its best performances of the season en route to a 48-0 Wolverine Conference victory over host Sturgis Friday night.

In the process, veteran Chieftain coach Mike Stanger picked up his 100th career victory in Dowagiac.

The Chieftains (3-3) used a balance offense and a stingy defense to square its record.

Dowagiac had 137 yards passes as Cailyn Murphy went 7-of-10 with a touchdown.

Dowagiac also got 42 yards from Nico Linares and Dashawn Brooks, while Kade Schreiber and Andrew McIntosh both finished with 39 yards.

Alex McIntosh was the leading receiver with 86 yards on three receptions and a touchdown.

Linares scored on a 40-yard run, while Murphy had a pair of rushing touchdowns (13 and 1 yards), while Brooks and D.J. Lanier both scored on two-yard runs.

Murphy connected with Alex McIntosh on a 20-yard touchdown toss.

Defensively the Chieftains limited the Trojans to 131 yards of total offense.

Hunter Williamson led Dowagiac with 11 tackles and a pair of fumble recoveries.

The Chieftains return home Friday night when they host Otsego for homecoming. Kickoff is set for 7 p.m.