Rangers qualify for playoffs with 50-0 win over Marcellus 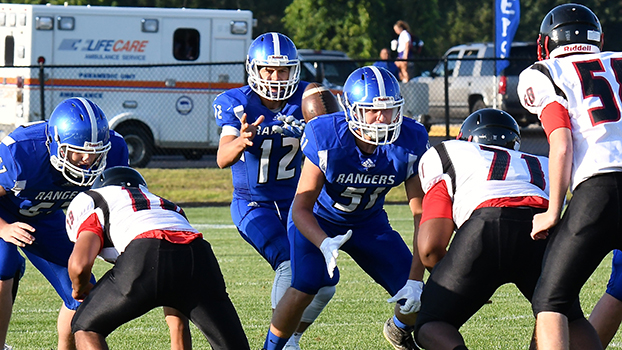 Cassopolis quarterback Dylan Green ran for two scores and threw for a touchdown in the Rangers’ 50-0 win over Marcellus. (Leader photo/KELLY SWEENEY)

MARCELLUS — The Cassopolis football team improved to 6-0 on the year and earned an automatic qualifying spot for the Michigan High School Athletic Association playoffs with a 50-0 over host Marcellus in Southwest 10 Conference play Friday night.

The Rangers rolled up 43 first-half points in complete domination of the Wildcats, who crossed midfield just one time.

Cassopolis rushed for 252 yards and threw for another 67, while the Ranger defense held Marcellus to just 17 yards of total offense.

Quarterback Dylan Green turned in a big game as he rushed for 89 yards and scored on runs of 26 and 41 yards. Green was also 8-of-10 for 67 yards and a 13-yard touchdown pass to Tyrese Hunt-Thompson.

Defensively for the Rangers, Ahsan Hart and Hunter Parsons both finished with seven tackles, while Green, Darrion Gatson, Hart, Skylar McKee and Samson Yuhas all recovered fumbles as the Wildcats turned the ball over five times.