Eddies qualify for postseason with win over Plainwell 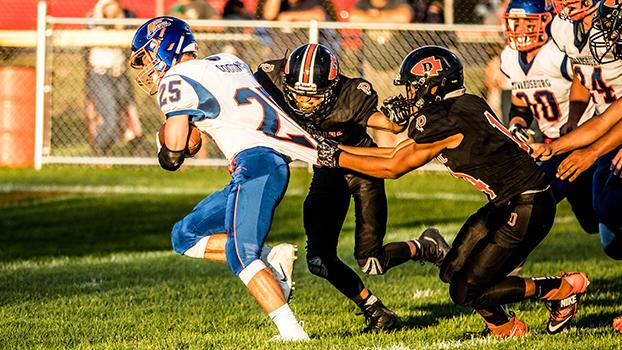 Edwardsburg’s Caden Goggins rushed for 111 yards and scored a pair of touchdowns against Plainwell Friday night. Goggins also had a kickoff return for a touchdown. (Leader photo/SCOTT ROSE)

PLAINWELL — Visiting Edwardsburg had no trouble tuning up for its showdown with Three Rivers this Friday night as the Eddies rolled past host Plainwell 58-6.

Edwardsburg and the Wildcats will square off for the Wolverine Conference championship at Leo Hoffman Field Friday. Kickoff is set for 7 p.m.

The win over the third-place Trojans also earned the Eddies an automatic qualifying berth in the Michigan High School Athletic Association state playoffs as they improved to 6-0.

Three Rivers (6-0) also earned a playoff berth with its 55-7 victory over the Rams.

Edwardsburg scored a pair of first quarter touchdowns and never looked back in building up a 38-0 halftime advantage.

Caden Goggins rumpled in from 49-yards out for the first touchdown, while Isaiah Miller scored on a three-yard run.

In the second quarter, Tre Harvey, Mitchell and Goggins all scored on touchdown runs.

Goggins returned the second half opening kickoff 56 yards for his third touchdown of the night.

Mac Gaideski and Cayden Calhoun concluded the scoring with a touchdown run and a 50-yard interception return respectively.

Conner Nelson led the team with seven tackles. Gaideski and Cameron Thompson both had six tackles.