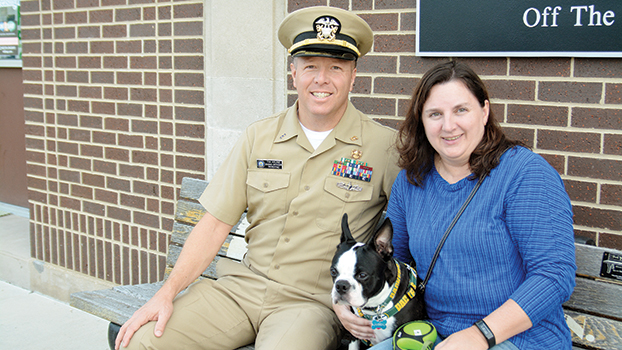 NILES — Sometimes, no matter how far a person is from their hometown, the pull to return for local traditions can remain strong and serve as a reminder that home is always there.

For former resident Tim Axline, this was the case. Axline is a Navy diving officer, who achieved the prestigious rank of chief warrant officer in 2005. This week, he left the sunny state of Florida and returned to Niles to take part in the Four Flags Area Apple Festival.

Axline has not been able to attend the festival since he left to join the Navy in 1990. His service has taken him all over the world from the Bahrain to Japan and Kingsbay, Georgia.

Currently, Axline lives in Fernandina Beach, Florida, with his wife Stacy, who also served in the Navy, and their two dogs. The couple’s grown daughters, Lyndsee, 24, and Shae, 20, also live nearby. This year, he felt a calling to return to hometown tradition while visiting his parents on Barron Lake.

“When I thought about coming up here, I was like, ‘wow, I have not been to the Apple Festival for at least 20 years,’” Axline said. “The best part of it is it sparks the memories that you have as  a kid growing up here. Even if you are not [always] tak[ing] part in a tradition, you know it’s there and that’s part of how you relate to your roots.”

Growing up in Niles, Axline said it was not a tradition for his family to attend the Apple Festival, but they did so on a few occasions, and he has a few fond memories from the festival. He recalls buying one his favorite T-shirts at the Apple Festival: a Def Leppard shirt, which he liked wearing to St. Mary’s School, much to the upset of one of the sisters.

For Axline, being in the Navy was a childhood dream. He recalled an eighth-grade class assignment for then English teacher Patty Eycleshymer, where he wrote an autobiography, detailing his plans of a career in the Navy. Axline said he was inspired by the career path, because his older cousin was in the Navy.

“I just knew the Navy sounded cool,” Axline said. “I remember talking with him [his cousin] on the phone about salvage ships and thought that sounded cool.”

Axline would live out his childhood dream. Following his 1990 graduation from Niles High School, the Viking signed up for boot camp and began training to become a diving officer. As a diving officer, Axline’s work requires him to retrieve sunk planes, complete work on Navy submarines and salvage at various sites.

Axline is expecting to retire in a couple of months and can look back on many accolades, including three Navy commendation medals for excellent performance and three end of tour awards, as well as various campaign medals, which recognize overseas missions.

Bringing a bit of his background to the Apple Festival, Axline will take part in the Grande Parade and ride a float decked out to look like a submarine. Axline’s dog, Lambeau will wear a sailor hat and accompany Axline in a wagon alongside the float.

As he drove down Lake Street earlier this week, Axline said he saw carnival rides being set up. Looking forward to the festival, Axline said what he is most hoping to take part in at the festival is catching up with fellow Viking Alumni and seeing friends and neighbors that he has not seen in years. Seeing a familiar face as he bustles around town is something the Navy service man said he has missed.