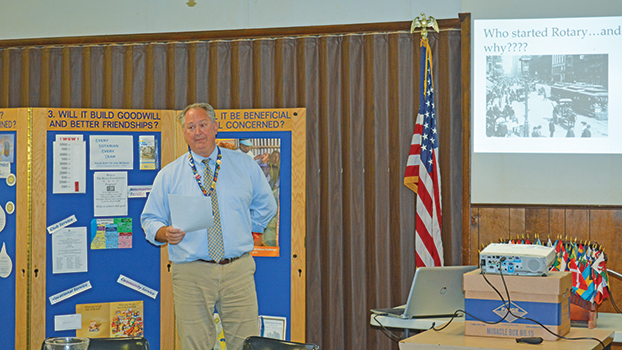 Rotarian Matthew Cripe presented to the Dowagiac Rotary Club about the history and purpose of Rotary International. (Leader photo/SARAH CULTON)

Presenting to the club during its regular, weekly meeting, Cripe showed the club what an orientation for a new member would look like by taking the members through a journey of Rotarian history and tradition.

Rotary International is a non-political, non-religious service organization founded by Paul Harris, a Wisconsin native, in 1905. According to Cripe’s presentation, Harris was something of a troublemaker in his youth, attended several colleges and worked many odd jobs, including a newspaper reporter, an actor and a cowboy, before starting Rotary International.

“This guy, Harris, was no saint,” Cripe said. “He was just a regular guy with an idea.”

Harris started a Rotary Club in Chicago in 1905 with other business men, who were looking to cultivate the same meaningful connections they had in their own small towns in the city. The city of Dowagiac even has its own place in the origin story of Rotary International, as legend has it that Harris came up with the idea for the club while at a resort on Indian Lake in Dowagiac.

“This group was made with the idea of making meaningful lifelong friendships and having people who were relatively successful give back to their communities,” Cripe said. “This is a gathering of professionals who are willing and able to give back to the community.”

In the more than a century since Rotary International was founded, the club has grown to include more than 1.2 million members in 35,000 clubs across the globe.

Cripe said there is a stereotype of Rotarians being older men, who do nothing more than write checks to community organizations. However, he said that with the international diversity of the club, the stereotype was not true, adding that the club was diverse in age and in the services that it provides for the community.

“Rotary was never meant to be an old white guy’s club. There is a stereotype that it’s just a bunch of old guys sitting around, eating lunch and listening to speakers,” he said. “This is not true. It’s our mission to prove how wrong that misconception is.”

Even after all these years, Cripe said Rotary International is still about working and serving the community.

“We are active and engaged and involved,” Cripe said. “Rotary supports many charity efforts, including the fight against Polio, which is almost completely gone from the world.”

With presentation designed for new members, Cripe said he hoped that current members would be reminded and inspired by the presentation to get the word out about what the Rotary Club does in the community and worldwide.

“When people see the good we are doing in the world, more and more people will want to join,” he said.