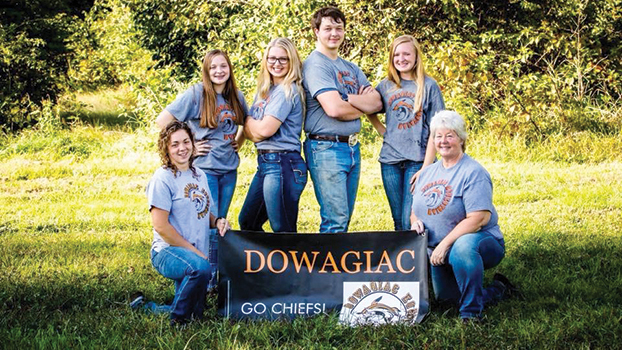 The Dowagiac Equestrian Team will compete in Berrien Springs Saturday and Sunday for the right to advance to the state finals. (Leader photo/SCOTT ROSE)

DOWAGIAC — The Dowagiac Equestrian Team will be in search of its fourth trip to the state finals this weekend in Berrien Springs.

Competition will begin at 9 a.m. Saturday

To advance to the regionals, teams had to finish in the top two of their Class.

Edwardsburg, by virtue of being the only Class A team, won the district championship and moved into the regional round, while Dowagiac, a Class C team, finished second to Bridgman to advance to regionals.

Bridgman finished with 486 points, while Dowagiac has 291 points. Dowagiac entered the final round of competition in fourth place, but overcame two teams to move on.

Buchanan will also compete in the regional after finishing runner-up to St. Joseph in Class B.

Niles finished fourth and did not qualify.

“Jared was really determined to get to regionals this year,” Judy Stilwell said. “It would be really nice if we could make it to state. We are going to give it our all this weekend and see what we come out with.”

The team is coached by Danielle Franklin and Judy Stilwell. Stilwell has been helping coach the Dowagiac Equestrian Team since the mid-1980s.

Jared Stilwell is the lone senior on the team and has helped Dowagiac qualify each of the four years he has been a member of the team.

White was unable to compete this season for Dowagiac due to an injured horse.

The top two teams in each class will advance to the state finals in Midland, Oct. 11-14 at the Midland County Fair Grounds.

Stilwell led the team in points so far this season with 98. He has competed in Western, Hunt and Speed classes.

Davis, who is third on the team with 65 points, has competed in Hunt Seat and Saddle Seat Classes. She and Stilwell compete in the speed events.